If you heard "North Carolina," say, a month ago, what images would that have conjured? The Outer Banks, tobacco fields, the Great Smoky Mountains? Probably not a gender-neutral bathroom or Born in the U.S.A.

When Bruce Springsteen cancelled his appearance in the state to protest HB2, a so-called bathroom bill, which bars local LGBT anti-discrimination ordinances and stipulates that transgender people must use the washroom designated for their birth gender, the Internet lit up. The more niche awareness of the controversy swelled to the mainstream with the Boss's giant diss, and suddenly everyone was weighing in. Bryan Adams followed suit with a cancellation of his Mississippi concert, as did Ringo Starr. Meanwhile companies such as Lionsgate and PayPal voiced their outrage and put their money where their mouth is, pulling out of various plans for the state.

This is all great. But HB2 still stands.

In these heady days, you do not need to be a rock star to command attention for a cause or complaint.

It has never been easier to announce your displeasure to the world. Where once you had to make a real effort – march on Washington, dump tea into a harbour, or put your life on the line by chaining yourself to a tree or standing in front of a tank, it is no longer necessary to even get up in order to stand up for your rights. All you have to do is compose a tweet or a Facebook post and you're off to the races. You can do that sitting (or lying) down; you can even do it drunk (although this is not recommended).

Your thoughts on the Panama Papers in 140 characters or less!

Protest is a basic element of a democracy, as we learned in university, and of course there is no greater democratic platform than the Internet. Now everyone can have their say, with a potential global reach.

So a Montreal woman you've never heard of writes a Facebook post about a spontaneous one-on-one protest against age-defying cosmetics, during which she mercilessly challenged a man hawking beauty products at a Calgary airport shop. It goes viral, as they say. Suddenly the world is cheering Annick Robinson as she relays what went down with the salesman who warned her that by the time she's 50, it will be too late to correct sagging skin and deep wrinkles. "Unless you act now, only surgery can correct those," she recalls him saying.

Fantastic, right? But in the end is this anything more than a great tale from YYC, a lecture we might all fantasize about unleashing ourselves, but probably won't? Women may be loving this message, but will we follow up by absenting ourselves from the cosmetics counter?

This rant has clearly been far more potent than your average social media post of outrage. Still, what will it come to?

When it's so at-our-fingertips easy to participate, it may feel as if protest does not carry the same weight.

And yet this newish form of protest has become an expected and essential part of the conversation – whether you're reacting to Bono's editorial about refugees in The New York Times, spreading the word about Inky the octopus's ultimate act of protest – escape – or frustration-tweeting about the rotten service from your cable provider. (Try it – while waiting on hold listening to that godawful music and assurances at regular intervals that your call is important to them, tweet at the cable company and see which gets a response first. For me, in every instance, it has been the tweet.) The democratization of commentary comes with its dark side. With the rapid-fire nature of it all, hot takes (and hotheads) are all the rage. Oh, and the rage – it is ubiquitous. Along with a five-alarm level of snark – or worse. This week The Guardian released research into its own site's comments that determined pieces written by women are far more likely to attract abuse and trolling. (Last week, for the first time in my life, I blocked someone from e-mail – because of outrageous, demeaning and misogynist comments.) Even the politically correct social media pile-on can be outrageous.

And it may seem futile. Women can tweet with abandon and rage about Jian Ghomeshi, but at the end of the day, he still walked out of the courtroom, acquitted. And in North Carolina, despite a backlash-response tweak to the law, a transgender person is still relegated to using a public bathroom that makes them feel uncomfortable.

It may not always effect change IRL (in real life), but social media as an accessible demonstration strategy allows for the expansion of citizen outrage from the dinner party to the world. And – for better or for worse – it allows the court of public opinion to prevail.

Editor's note: An earlier version of this story incorrectly stated Bryan Adam cancelled a North Carolina concert.. This is the corrected version. 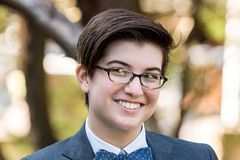