Dave Bidini is the author of The Best Game You can Name.

I recently landed in Toronto on a flight from Calgary. While arriving, the pilot came on the speaker: "For those continuing on, please see the flight board for your gates. For those staying in Toronto, my condolences." While a dull jab, it was also a reminder that, lo' these many years, antipathy towards Canada's largest city is still a thing. It's unity glue, a frequency around which the rest of the country vibrates. I'm hoping Canada 150 finds the time and money to address this, but I'm not sure how.

Toronto-thrashing has always found an impulse in the success – or lack thereof – of hockey's Toronto Maple Leafs, a historically bad NHL franchise which hasn't won a championship since Canada's centennial, among the longest droughts in North American professional sports. A few years ago, yet another Leaf collapse was described by general manager Brian Burke as like watching "an eighteen-wheeler go off a cliff."

Never one to blush through the bombast, Mr. Burke's airborne truck, its flaming chassis and hellbent trailer were like Victoria Day fireworks for many: failure painted in great celebratory light for everyone other than those with Darryl Sittler sweaters hanging in their closets. In Canada, we're bereft of that which threads our disparate and enormous land together, yet Leafs schadenfreude has always managed to bring the oceans closer together.

While our governments' response to the shock waves of the Trump administration has left the nature of our country hanging in the balance, something else is reshaping our national identity: the Leafs are actually good. People in the sporting world have heard this kind of thing before – they were actually good before they blew a three-goal lead to Boston in the playoffs, too – but few NHL teams in recent memory have possessed the Maple Leafs' promise when it comes to gifted young talent.

While teams from other eras might have driven to the edge of the cliff, then lemminged into the abyss, this group appears to be holding steady and winning past the calendar's turn, to say nothing of playing in a very organized, clinical and perfunctory way. Before, Maple Leafs players greeted success like kids being surprised with a gift. Now, the kids shrug at the gift before stickhandling it across the living room for a shot on goal.

A quick look at the numbers: Eight talented rookies, two of them – Auston Matthews and Mitch Marner – among the top-three in rookie scoring. (Mathews and Marner have volleyed the lead back and forth along with Winnipeg's Patrik Laine.) There's a young Russian defenceman, Nikita Zaitsev, who has landed on the team's top defence pairing and two other forwards – Conor Brown and Zach Hyman, both Toronto-born – who play alongside Matthews and who are also in the top grouping of point-getting freshmen.

There have been young stars on the team before, but this group seems poised to not only destroy all Maple Leafs rookie records, but league records, too. In a sport that has suddenly become fast, youthful, open to players of all-sizes and – most importantly – fun, the Leafs have captured zeitgeist in a bottle.

Matthews, the former number one draft choice named to the NHL All-Star game, is a fascinating and important player for reasons beyond his ability to almost single-handedly revive a moribund franchise.

Set against the continental distortion and confusion of Donald Trump's wrenching apart of North American relations, the Leafs centre is a symbol of that which the president is trying to destroy: an Arizonian, with a mother from Hermosillo, Mexico, who makes his living playing a winter sport in Canada. If our collective national bond is being undone by the Leafs success, another is born. Mr. Mathews is pure NAFTA on skates. Unity, indeed. 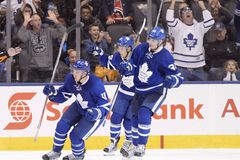 Mitch Marner becomes third Leaf to win rookie of the month this season
February 1, 2017
Too early in Toronto Maple Leafs' rebuild to think about trading for big-time defenceman
January 24, 2017
Follow us on Twitter @globedebate Opens in a new window
Report an error Editorial code of conduct
Due to technical reasons, we have temporarily removed commenting from our articles. We hope to have this fixed soon. Thank you for your patience. If you are looking to give feedback on our new site, please send it along to feedback@globeandmail.com. If you want to write a letter to the editor, please forward to letters@globeandmail.com.
Comments