Stéphane Dion was famous beyond Canada's borders long before he made his debut on the world stage as Canada's Foreign Affairs Minister, defending arms sales to Saudi Arabia.

As Jean Chrétien's bad cop intergovernmental affairs minister from 1996 to 2003, Mr. Dion's perspective was highly solicited by foreign journalists and governments faced with separatist threats within their own borders. His crowning achievement – the Clarity Act of 2000 – left many of them gobsmacked by making Canada the only major democracy at the time to declare itself divisible. How, they asked, could any country's unity minister concede such a point?

At home, Mr. Dion was mainly known as the pit bull federalist who made life hell for Quebec sovereigntists. The Clarity Act, adopted in response to a 1998 Supreme Court ruling, specified that Ottawa would only negotiate Quebec's separation if a "clear majority" of the province's citizens voted Yes to a "clear question" on independence in any future referendum.

While many federalists saw the Clarity Act as a provocation that risked stoking support for Quebec sovereignty, it turned out to be a stroke of genius with the opposite effect. That earned Mr. Dion rock-star status among foreign politicians grappling with their own separatist threats.

Nowhere beyond Canada's borders has Mr. Dion's name come up as often as in Spain, where, in contrast to the situation Ottawa now finds itself in, Madrid has faced a growing separatist movement in Catalonia. Last week's proposal by the Socialists' Party of Catalonia (known by its Catalan initials, PSC) to formally embrace "la via canadiense" (or the Canadian way) in dealing with demands for an independence referendum is indirectly based on Mr. Dion's advice, offered in the countless speeches and interviews he has given in Spain over the years.

"One cannot rule out the possibility of circumstances arising in a democracy that make negotiating a secession the least harmful of foreseeable solutions," Mr. Dion said in a 2003 speech in Madrid.

Spain's Constitution describes the country as "indivisible," providing the central government with a legal upper hand. But Madrid's refusal to recognize the legitimacy of a Catalonian plebiscite, while bolstering support for Prime Minister Mariano Rajoy's centre-right People's Party elsewhere in the country, has only served to strengthen the separatist cause in Catalonia.

Hence, the PSC's idea for a Spanish Clarity Act.

The proposal is a non-starter with Mr. Rajoy. Nor is it welcomed by the Spanish Socialist Workers' Party or PSOE, the PSC's sister party on the national stage. The PSOE supports turning Spain into a federation, recognizing Catalonia's "singularity." But constitutional reform has proved no easier in Spain than in Canada.

PSC Leader Miquel Iceta describes la via canadiense as a Spanish Plan B if constitutional reform fails or is rejected by the Catalonian parliament, which is currently controlled by a coalition of separatist parties. The debate is hardly academic. Catalonia already held an independence referendum in 2014. But while the Yes side won 80 per cent support, only 37 per cent of voters turned out because Madrid had declared the vote illegal in advance.

Opinion polls show about 80 per cent of all Catalonians want another referendum, one with the legitimacy of Madrid's blessing. The insurgent Podemos, which has upended national politics by shattering the country's previously two-party political system, supports that idea. Podemos won the largest number of votes and seats in Catalonia in last month's national elections, putting increasing pressure on Madrid to soften its stand.

Mr. Rajoy's party won a slim plurality of seats nationally but has yet to find a coalition partner, leaving Spain facing the prospect of its second hung Parliament in a row. The ongoing political paralysis in Madrid plays into the separatists' hands.

Mr. Iceta is seeking to reseize the initiative when Socialists have been losing ground to Podemos nationally and to separatist parties at the regional level. His proposal confirms that, no matter what he does at Foreign Affairs, Mr. Dion has already made his mark globally. 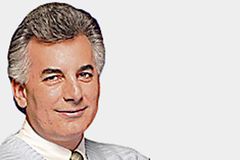