Following Spain's inconclusive general election on Sunday, talks – potentially marathon-length – have begun to form a new government. Given the significant possibility that no deal will be reached, a second ballot may be necessary in 2016, raising political and economic uncertainty in what is the euro zone's fourth-largest economy.

The ballot ended the long-running political duopoly of the People's Party (PP) and the Spanish Socialist Workers' Party (PSOE) that has dominated the country since the late 1970s. The ruling right-of-centre PP emerged again as the largest party, but it is more than 50 seats from a majority in the lower house of parliament, and there has been a potential electoral breakthrough for two "new parties" – the leftist, anti-austerity Podemos which finished a strong third with over 20 per cent of the vote, and the centrist Ciudadanos, which came fourth.

The combined vote of PP and PSOE, which was 84 per cent of the ballot in the 2008 general election, fell to around 50 per cent. Filling this political vacuum are Podemos and Ciudadanos, whose rise has been fuelled by popular anger over political scandals, the fall-out from the deepest economic recession in the country in recent years, and also the growing political clamour for independence in Catalonia.

Unfortunately, the increased political uncertainty from the election has the potential to undermine the nascent economic recovery, which has recently seen GDP growth rise to 3 per cent following the worst recession in decades, a property crash, and unemployment that peaked at 27 per cent – almost 60 per cent for adults under 24. While the jobs market is improving, unemployment is still above 20 per cent and is forecast by the IMF to be 16 per cent in 2020, around double the pre-crisis rate of 8.5 per cent, and the second highest in Europe, behind Greece.

With post-election negotiations underway, the expected next step in the process will be for King Felipe VI to propose a prime ministerial candidate this month or next. The person must win a majority within 48 hours after the first vote to form a government.

If this cannot be achieved, the king can propose other candidates. However, if no candidate has the numbers to do so within two months of the first vote, parliament will be dissolved and new elections triggered.

Given Sunday's electoral earthquake, there is now more than one scenario for the future national governance of the euro zone's largest economy after Germany, France and Italy. Firstly, given the PP's status as the largest single party, it will test out the waters with Ciudadanos, which is its closest rival, ideologically speaking, and explore the possibility of a pact, possibly along with other smaller parties.

One key challenge here is that that the PP and Ciudadanos will not collectively have the 176 seats in the lower house for a majority by themselves. Moreover, Ciudadanos has previously pledged not to support a second term for incumbent PP leader and Prime Minister Mariano Rajoy, who appears eager to stay in office.

The most likely other scenario is for PSOE to seek an accommodation with Podemos, and possibly Ciudadanos too, as a PSOE-Podemos combination, which Podemos has dismissed in the past, would also fall short of a parliamentary majority. It may require at least the tacit backing of Ciudadanos or other smaller parties to be a realistic option.

A key backdrop to the election was growing tension between Madrid and separatists in Catalonia over issues such as linguistic rights and fiscal autonomy. In September, pro-independence parties won regional elections with just under 50 per cent of the vote. With the wind at their backs, separatists are looking to begin the process of independence from Spain, including the drafting of a new regional constitution.

Whereas the PP has taken a hard-line stance toward the separatists since its election victory in 2011, the other parties have talked about the need for reform of the Spanish constitution to try to quell the regional demands for independence. Podemos, which performed strongly in Catalonia in Sunday's election, has gone furthest by calling for a referendum on independence, and a new Spanish federation of semi-independent nations, both of which PSOE and Ciudadanos have previously opposed.

Overall, the end of the post-Franco two party system has increased political uncertainty in Spain. If no party can secure agreements that will command a majority in the lower house of parliament, fresh elections will take place in 2016. 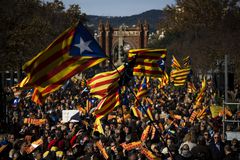