Prime Minister Stephen Harper's government has a terrible record before the Supreme Court of Canada. And even its one rare win of late had all the markings of a Pyrrhic victory.

It seemed like the entire political class in Quebec had been unanimous in insisting that Ottawa turn over its records from the defunct long-gun registry so the province could set up its own program. Quebec even appealed to the top court to force the Harper government's hand.

When the court ruled 5-to-4 last month that Ottawa was within its rights to shred the Quebec data there were cries of condemnation by politicians in the province. In their dissent, the three Quebec judges on the court said that's not how the federation is supposed to work.

Quebec Premier Philippe Couillard insisted his government would go ahead and create its own registry. And the Harper government appeared once again to have gone out of its way to alienate Quebeckers by refusing to hand over the data in the spirit of co-operative federalism. Cue the anti-Harper backlash.

Oddly, the opposite happened. Instead of the groundswell of sympathy Mr. Couillard expected, voters in the province considered most supportive of gun control balked at his registry plan – more evidence yet of the vast divide between Montreal and the rest of Quebec.

The greater Montreal area accounts for about half of Quebec's population of 8 million. Beyond the ethnically diverse and hip urbanites of Montreal proper and the suburbanites in neat subdivisions lies a far different electorate. Voters outside the Montreal GMA are conservative – whether they admit it or not, and whether or not they always mark their ballot in accordance with their core beliefs.

That helps explain why a Léger Marketing poll last week showed that a solid majority of voters outside the Montreal area opposes Mr. Couillard's registry plan. Two-thirds of voters in eastern Quebec said they were against it; in the Quebec City area, fully 57 per cent said no to the plan.

In rural Quebec, hunting is popular and government, in general, is not. A Tory riding association near Quebec City recently proposed raffling a Winchester rifle to raise money, only to cancel the plan after the Montreal media got wind of it.

The Conservatives have seen their Quebec poll numbers spike in the wake of last fall's terrorist (their word) attacks in Ottawa and Saint-Jean-sur-Richelieu. The government's anti-terror bill is being piloted by Public Safety Minister Steven Blaney, a sunny 50-year-old Quebecker dubbed "Mr. Smile" by one television host.

It is rare that a government in the 10th year of its mandate manages to lure star candidates anywhere. But Mr. Harper has attracted a sudden flurry of them in Quebec.

The biggest is Gérard Deltell, a popular former TV journalist and Coalition Avenir Québec MNA, who resigned his provincial seat last week to seek the Conservative nomination in Louis-Saint-Laurent. The riding fell to the New Democrats in 2011's Orange Wave, but Mr. Deltell looks like a shoo-in in October – so much so that polling analyst and blogger Bryan Breguet suggests the Tories are silly to waste his talents there. Better to run him in a more competitive riding.

Based on recent polls, Mr. Breguet predicts the Tories would win upwards of 15 of Quebec's 78 ridings, up from the five they hold now. That could be the difference between a majority or minority government. If the Tories do hold on to power, it would also provide Mr. Harper with a less embarrassing front bench in a province where (Mr. Blaney aside) he seriously lacks strong surrogates.

A rumour has former foreign affairs minister Lawrence Cannon returning from Canada's embassy in Paris to run for the Tories in the Quebec City area. If true, the Conservatives will finally have a Quebec "team" it can advertise as cabinet-worthy.

Neither Justin Trudeau's Liberals nor Thomas Mulcair's New Democrats have so far shown much success in recruiting stars in Quebec. The Bloc Québécois is even worse off. Former mayoralty candidate Mélanie Joly is seeking the Liberal nomination in Montreal, but her move has drawn howls of criticism since she vowed in 2013 to stay in municipal politics for the long haul.

So, Mr. Harper has reason to be optimistic about his Quebec chances – with one big caveat. No one can predict how even basically conservative but always fickle Quebeckers will be feeling on election day.

A coalition? Why Trudeau has more in common with Harper than Mulcair
May 14, 2018 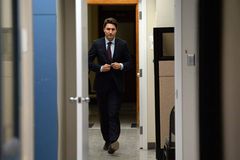