Five questions. That's right. The Prime Minister has told journalists travelling on his campaign tour that he will only answer five questions a day.

On the last day of March, reporters in Halifax - standing behind a yellow barricade at least a dozen feet away from Stephen Harper - called out to him to explain why only five questions. He refused to respond. Liberal Leader Michael Ignatieff and NDP Leader Jack Layton answer all the questions they're asked, the reporters pointed out. Why had Mr. Harper limited reporters to five questions a day? He refused to explain. "If there's another subject, I'll answer it," he told them.

When the reporters properly pushed back, getting into a bit of a shouting match with the Prime Minister, he again refused to elaborate. "If there are other subjects I'm not addressing, I'll take them. What's the subject? One subject." Mr. Harper was then asked a question about Libya. He answered it and walked away.

So there we have it: The Prime Minister who promised more openness and accountability, who's been in power for five years, has told the press to get used to it - you can cover my campaign, but you can ask only five questions.

Members of the media were predictably indignant. Paul Wells, of Maclean's, speaking on April 5 on a morning radio show, lamented the restriction: "The fact is we can't ask the Prime Minister about real situations that concern real people, we can't press the Prime Minister for straight answers on things like the cost of his programs, promises he made in the past he hasn't kept, things like that."

Journalists play a vital role in our society. We depend on them to ask questions and demand answers. Mr. Harper and the other party leaders are running for the highest office in the land. Even opposition MPs are allowed to ask follow-up questions in the House of Commons. But not reporters covering the Conservative campaign.

The only astonishing thing is that the media are taking it. They are playing along, accepting the unacceptable.

It's the middle of an election campaign. Reporters are not only entitled to ask the Prime Minister about his record and accomplishments, they're required to do so. It may be good politics for Mr. Harper to build a bubble around his campaign, and throw a blanket on the media. After all, the Conservatives are leading in the polls. But what's incomprehensible, inexplicable in fact, is that the media have accepted it. True, when the policy was announced, some journalists objected. Their complaints were ignored, then it was on to the next scripted stop.

Ask any reporter. Since Mr. Harper took office, the bureaucrats have stopped talking to journalists because they fear reprisals. Many government MPs won't return telephone calls if it's the news calling. Cabinet ministers regularly refuse to comment. The Harper government has established more roadblocks to access to information than any other government since the act was put on the books.

Mr. Harper's refusal to provide information to Parliament on the cost of his law-and-order initiatives is just the latest in a long list of his top priority: information control. How long are reporters going to allow themselves to be pushed around? When are they going to say, "We've had enough"?

Ignatieff, 'Liberal food' and a cantankerous Tory bowler
May 3, 2018 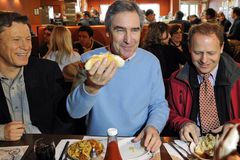 No prescreening of questions or audience vetting at Layton town hall
April 29, 2018
Follow us on Twitter @globedebate Opens in a new window
Report an error Editorial code of conduct
Due to technical reasons, we have temporarily removed commenting from our articles. We hope to have this fixed soon. Thank you for your patience. If you are looking to give feedback on our new site, please send it along to feedback@globeandmail.com. If you want to write a letter to the editor, please forward to letters@globeandmail.com.
Comments