"Change" is every opposition party's favourite word. On its acceptance or rejection by the electorate hangs an election's outcome.

"Do you want change in Ottawa?" New Democratic Party Leader Tom Mulcair asks, knowing the response he will receive from 400 or so enthusiastic partisans. In Hamilton this week, and at every event as he barnstormed through Southern Ontario, Mr. Mulcair asked the same rhetorical question.

The New Democratic partisans who give up a precious summer evening to see their Leader clearly want an orange change, but do enough Canadians see the NDP as the best vehicle for change after nine years of the Harper government?

It is too early to predict results, the election being about three months away. But the NDP Leader's team, with the smart, capable and tough Mr. Mulcair at the top, is resolute, savvy and determined to win. Only a miracle would allow the New Democrats to form a majority government, because the party is a non-starter in too many parts of the country.

But the NDP could win the largest number of seats or come close. For the first time in its history, the party is a player in the scramble for federal power. Huge swaths of the electorate are hostile to the Harper Conservatives. The Liberals have not capitalized sufficiently on that opportunity, leaving an opening for the NDP and its resourceful Leader.

Mr. Mulcair moved across Southern Ontario this week in a dry run for the formal election campaign. There were the usual assortment of mind-numbing photo ops for television, local media interviews, short policy statements, schmoozing with residents, and everywhere that word – change.

The NDP Leader is a political pro. He knows how to stickhandle away awkward questions and how to seize any occasion to say only what he wants to say. Unlike Prime Minister Stephen Harper, Mr. Mulcair takes questions from the members of the news media accompanying him and from local reporters.

Barack Obama he is not, but Mr. Mulcair is acceptable as an orator, in perfect French and English. He reads from Teleprompters at the back of the hall and seldom goes off script. He is not a happy-warrior kind of leader – no Jean Chrétien wisecracks, no Brian Mulroney stories – but then he is not running against personal charmers, but against Mr. Harper.

Mr. Mulcair has been a political actor for many years. He is willing to act again: reading to children at a daycare centre, feeding a two-day-old calf at a dairy farm, attending to the needs of television for some sort of contrived pictures.

He will wear an orange tie for one occasion, take it off for another. He will be Happy Tom, Smiling Tom, Man-of-the-People Tom, even while his party puts out nasty videos about Conservative Party misdeeds. He will do what is needed to win. Previous NDP leaders engaged in the empty ritual of claiming to be running to become prime minister. Tom Mulcair means it.

He runs through the litany of NDP policies of change: the creation of one million, $15-a-day child-care spaces; lower taxes for small business (arbitrarily defined as companies with taxable capital below $15-million); a federal minimum wage of $15 an hour; more money for cities and farmers; more stringent environmental regulations; and a leader who will be a "champion for manufacturing," a slogan tailor-made for Ontario.

At this stage of the campaign, a leader gets away with promoting policies that are not analyzed carefully. They will be, in due course, but perhaps that won't matter if the electorate decides that the Conservatives must go.

And why give small business a 2-per-cent corporate tax break, but make other companies, which are often in more internationally competitive circumstances, pay more tax?

These, and a host of other questions, remain to be asked and credibly answered. But for now, Mr. Mulcair is sailing along on the winds of encouraging polls, the rank and file are pinching themselves with delight, the campaign is being well organized and not an event passes without that most potent political word of all being repeated over and over again – change.

NDP open to coalition with Liberals to topple Tories; Grits say no
July 23, 2015 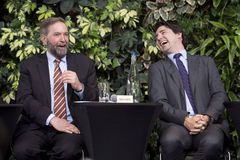 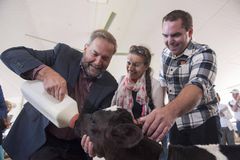 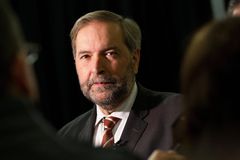