The Supreme Court of Canada's split decision on whether a woman can wear a religious veil in the courtroom strikes a reasonable balance between competing rights. Rather than an "all" or "none" approach, the court outlined a four-part approach toward answering the question: Should a woman be required to remove her niqab while testifying? This framework will apply on a case-by-case basis, and the result will depend on each case.

As the court ruled, no right is absolute. In trying to reconcile the right of religious freedom versus the right to a fair trial, we should consider four questions.

First, what's the level of sincerity of the niqab wearer? The key is whether she believes she's required to wear the veil. In keeping with previous case law, it doesn't matter whether hers is a minority belief within her own faith. And occasional removal doesn't indicate a weakness of sincerity. In the case before the court, the Toronto complainant known only as N.S. indicated that she had removed her niqab when renewing her driver's licence, and at border crossings for identification purposes.

Next, would allowing the witness to wear her niqab while testifying create a serious risk to a fair trial? Here, the majority discussed the importance of observing the demeanour of the witness – including facial expression – as part of the cross-examination. This has been an integral practice historically, and serves as a key tool in assessing the credibility of a witness. But Madam Justice Rosalie Abella dissented, citing situations where demeanour is difficult to assess because of various impediments, including the use of an interpreter, a speech impediment, or partial facial paralysis due to stroke. According to Judge Abella, "witnesses who wear niqabs should not be treated any differently."

Third, if the answer to the first two questions is Yes, then the judge must see whether there's a way to reasonably accommodate both rights in the case at hand.

Finally, if no accommodation is possible, then the judge must weigh the harms and benefits of requiring the witness to remove her niqab. The former includes the broader societal harm of "discouraging niqab-wearing women from reporting offences and participating in the justice system." Beneficial effects include "preventing harm to the fair trial interest of the accused and safeguarding the repute of the administration of justice." Here, the judge will have to weigh how central each of the following factors is to the case: the witness's testimony, cross-examination and credibility assessment, and the nature of the proceedings.

In addition to the specific legal issues, the Supreme Court judges commented on wider societal issues.

Chief Justice Beverley McLachlin reiterated that, when faced with conflicts between freedom of religion and other values, the "Canadian approach" has been to "respect the individual's religious belief and accommodate it if at all possible." This approach is entrenched in our laws.

The Chief Justice also said a total ban on the niqab is an intrusion by the state that's not consistent with the Charter of Rights. The onus is on the government to show that such an intrusion is in the public good, or is due to conflicting interests. This may be used in a future challenge against the government's blanket niqab ban at citizenship ceremonies. Furthermore, in the sexual assault case at hand, N.S. swore an oath on the Koran in court without having to remove her niqab to see whether she mouthed the words.

Unlike the Chief Justice's nuanced approach, Mr. Justice Louis LeBel suggested that a ban on niqabs in the courtroom would convey "openness of the trial process" and highlight the importance of clear, open communication in courts, adding "it would also be consistent with the tradition that justice is public and open to all in our democratic society." How would banning the niqab convey that justice is open to all?

Judge Abella, on the other hand, believes the niqab should be allowed in the courtroom, since cross-examination will include analysis of the witness's voice, pitch and body language. More important, denying a woman the right to wear her niqab forces her to choose between her religious belief and access to justice. This may prevent others from testifying.

This case should serve as a catalyst for Muslim communities to begin meaningful discussion about sexual assault. For too long, it has been a taboo subject, hidden as an object of shame and rarely discussed in broad moral terms. This weekend, as 20,000 Muslims participate in the Reviving the Islamic Spirit conference in Toronto, organizers should take the opportunity to address this topic to an engaged audience. 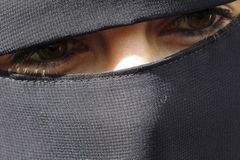 Witness may be required to remove niqab while testifying: top court
December 20, 2012