"Sorry," the Turkish border guard told me with a shrug, by way of apology for the rather atypical three-hour queue of dishevelled migrants and travellers I had just endured, "it's the Syrians." They are everywhere, these displaced and devastated Arabs, the poor packed into city-sized camps and the better-off encamped in the big cities.

The damage is region-wide. Bashar al-Assad's senseless war has not just ruined millions of lives; it has destroyed the longstanding ambitions of the Arab, Persian and Turkish leaders who have pinned their ideological fortunes to stability in Damascus. Things will never again be the same.

On a human level, the Syrian civil war is the worst thing to have happened to the Middle East in at least 20 years. It is already more deadly than the Iraq war ever was, and in its two years has killed as many civilians as all of Iraq's violence did over a decade. The use of poisonous gas against civilians has only one modern precedent, its use by Saddam Hussein to kill as many as 100,000 Kurds in 1988.

The war has created two million long-term refugees, and will likely create a million more by early next year. Those refugees are flooding into camps in Jordan and Turkey that appear to have become permanent settlements, and into the cities of Lebanon, where they are being received by the public as the Palestinians were a generation ago: as an unwelcome and unwanted menace. They'll likely stay displaced for a very long time, perhaps forever.

On the political level, the war has turned the region upside down, blowing a deep hole in the often opposing ambitions of Iran, Qatar and Turkey.

Perhaps no victim has been hit as hard as Turkish Prime Minister Recep Tayyip Erdogan who, beginning in 2003 – after Turkey's rejection of the Iraq war – turned to Mr. Assad's Syria as a major partner.

Then, after Turkey's European Union aspirations were thwarted by France and Germany in the 2000s, Mr. Erdogan's Foreign Minister, Ahmet Davutoglu, devised a grand strategy for the country – which he called "Zero problems with neighbours" and others called "neo-Ottoman" – to become the leading power in the Middle East by investing in, and winning the trust of, the Arab and Persian states to its south. This policy was built, first and foremost, on forging a tight bond with Mr. Assad, a former enemy. Billions in Turkish investments soon flooded into Damascus, and the Assad and Erdogan families even vacationed together.

It seemed to be working. When the Arab Spring arrived in 2011, Mr. Erdogan was cheered as a hero across the region, welcomed by adoring crowds, cited as a role model by postrevolutionary Islamist parties.

And then the revolution reached Syria. Suddenly, the formula stopped working. Mr. Assad became a very problematic neighbour indeed when he began crushing his country's democracy movement. Mr. Erdogan had spent the decade brokering negotiations between Mr. Assad and Israel, between Mr. Assad and the West, so he expected, and announced, that he would be able to negotiate peace in Syria. And then, to his horror, Mr. Assad ignored him completely and kept on fighting.

"For Erdogan, it was a personal humiliation, but it was also a very serious political defeat," says Emile Hokayem, the Bahrain-based author of the invaluable Syria's Uprising and the Fracturing of the Levant. "It was a real problem for Turkey as a regional power that a small state next door that was dependent on Turkey could turn Turkey down this way."

So, last year, Mr. Erdogan performed an about-face: He called for his former friend's ouster from the presidency, he provided arms to the rebels and fired artillery across the border, fully expecting an Egyptian-style transition and the return of Turkish influence.

This placed him deeply at odds with Iran – and with a large part of the Turkish electorate and military, which didn't want to be allied with Muslim Brotherhood-affiliated rebels – and he soon discovered that neither his army nor the United States was interested in unseating the Syrian dictator any time soon. He backed off, sought diplomacy, waffled. This failure, and the new Syria policy, was a major motivating factor behind this summer's mass protests here in Istanbul – and Mr. Erdogan's heavy-handed, demagogic response to those protests further alienated him from his neighbours and voters.

The Syrian explosion has blown a huge hole in this country's once-mighty government. Similar holes are being blown into the regimes of Iran and the Persian Gulf states. The Assad crater is vast and dark, and nobody knows what lies beyond it.

Opinion
Intervening in Syria will be easier said than done
September 7, 2013 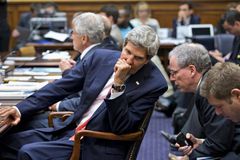