For most of the diplomats and world leaders seeking peace in the failed state that is Syria, it is clear that Russia's condoning of the actions of the Assad regime is the main obstacle to stopping further mass atrocities and the desperate flow of refugees. It is also clear that if Russia were to stop assisting the Syrian government's attacks on civilians, chances of a sustainable ceasefire leading to a political settlement would be much more likely.

Instead, we have serious allegations by the United States and humanitarian and rights groups that Russian planes were involved in the recent attacks on a UN aid convoy, which killed at least 20 people, and bombed the few remaining medical facilities. If this is proven beyond any reasonable doubt, international criminal law would deem Russian military and political leaders, including President Vladimir Putin, potential war criminals, if there is evidence of a systemic plan to commit such war crimes. This would be in addition to potential international criminal liability as co-perpetrators of crimes against humanity and war crimes carried out by Bashar al-Assad's government and military.

It is difficult to believe that Russian political and military leaders who are advising and planning strategy with the Syrian government and military are not aware of, and potentially condoning, the dropping of barrel bombs on civilians and the targeting of the medical facilities by Syrian aircraft, actions which constitute grave crimes against humanity and war crimes.

More than 400,000 Syrian civilians have lost their lives in the conflict, while millions more are either refugees or internally displaced.

Despite Russia's apparent complicity in Syrian actions, it's still considered crucial to involve Russian diplomatic and military leaders in the increasingly faint bid to stop the slaughter of civilians, especially in the city of Aleppo and elsewhere. That is one reason why Western leaders seem to have adopted a restrained silence in calling out Mr. Putin or his military leaders as war criminals, let alone seeking to trigger the jurisdiction of the International Criminal Court or the universal jurisdiction of national courts to contemplate prosecuting Russian individuals. This silence is both understandable and a legitimate short-term diplomatic strategy.

However, the long-term health of the democratic world requires leaders in Europe, the United States and Canada to speak out about Russia's complicity and condoning the Assad regime's atrocities. Russian actions in Syria may set a devastating long-term precedent for the world, a precedent in which authoritarian leaders respond to the invitations of brutal dictators to increase the horrors inflicted on their citizens.

Russian actions in Syria could also be setting another long-term precedent: that an easy way to disrupt the internal or regional unity of countries is to foster refugee flows into rival or neighbouring states. The flood of Syrian refugees into Europe, the greatest refugee migration since the Second World War, has spurred political and social turmoil within individual countries and the European Union as a whole. Canada has been one of the most successful countries in meeting the Syrian refugee challenges but as the carnage continues there, the humanitarian need to take in more will not abate.

There are suspicions, and some evidence, that Russia is also aiding some of the Euroskeptic right-wing, anti-refugee/immigrant parties; this may well be part of a Russian strategy to weaken governments in Europe that have imposed sanctions against Russian actions in Crimea and Eastern Ukraine. There is also some evidence that Russia has been interfering through cyberhacking in the U.S. election, and may be favouring presidential candidate Donald Trump, who could be more favourable to Russia's actions in Syria and Ukraine.

Such actions demonstrate that failure to strongly identify the actual and potential war crimes of Russia in Syria will have long-term consequences far beyond the imploding cities of Syria, reaching into the vital interests of the whole of Europe, the United States and Canada. To paraphrase Edmund Burke, evil triumphs when the good stay silent. 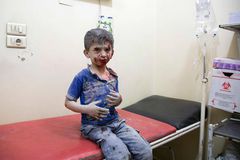