One afternoon in September of 1994, while wandering around what remained of the old city of Hama, I ran into the imam of a local mosque. Like all Syrians I met, he was delighted to learn that I was American and engaged by Syrian culture. We struck up a conversation in the shadow of the huge Roman water wheel, whose legendary groaning muffled our voices. Constantly looking over his shoulder, he told me of the devastating military assault ordered by then-president Hafez al-Assad in February, 1982, of the massacre of untold thousands in the space of a few days, of the stench of the dead left unwashed and unburied in the streets, and of the old city razed to the ground.

For the average Syrian citizen, Hama spelt dread; for the state, it was a source of pride. Why? Although unfortunate, the Hama operation had ended the Sunni Muslims' opposition to Alawite rule and eliminated the Islamist threat that other regimes were still combatting. Back in 1982, few Americans or Europeans seemed to think that anything should be done except regret this latest bloodbath.

Almost 30 years later, Syria is back in the headlines, and Hama is the lead story. With his father's "victory" in Hama still ringing in his head, President Bashar al-Assad believes he can crush the will of the people. But this time they are not cowed. A few days ago, over half of the city's population went into the streets carrying banners with "We Will Not Kneel" scrawled across them.

The cruel violence of 1982, it seems, did not eradicate the longing for freedom and democracy. It merely repressed the resistance and drove it underground. Above all, it created a climate of such terror that the only way to survive was to act as if all was well. To the outside world it seemed that, like Arabs elsewhere, Syrians supported their dictatorship and thus deserved it.

The Arab Spring has proven that judgment wrong. Just below the surface, an emotional cauldron has been simmering throughout the Arab world, and especially in Syria. In the past, whenever it was about to boil over, the regime would ease the pressure with a critical newspaper article or a play or film by a known dissident. This ploy, which led people to believe they were not alone in their dread and anger, acted as a kind of opiate and the crisis usually passed.

Also, Mr. al-Assad is not as clever as his Machiavellian father. He has inherited the lust for power and blood without the finesse.

Last week, Turkish Foreign Minister Ahmet Davutoglu, with the support of U.S. Secretary of State Hillary Clinton and other world leaders, flew to Damascus to scold Mr. al-Assad. Six hours later, Mr. Davutoglu emerged from his meetings with the Syrian President confident that the talks had gone well and that promised reforms would be introduced within 15 days. Two days later, Turkish papers reported that while the tanks were leaving Hama, Syrian troops were taking over the eastern city of Deir el-Zour.

The Assad regime is not going to stop, even when confronted by the return of what has been repressed for 30 years. The Syrian people will not stop either because they have lost their fear at the prospect of freedom from tyranny.

While years of undercover opposition have yet to produce an organization ready to take over from Mr. al-Assad and his clique, it is there that the new leadership will emerge. This is, and must remain, their revolution.

Miriam Cooke is a professor of Arabic literature and culture at Duke University and author of Dissident Syria: Making Oppositional Arts Official . 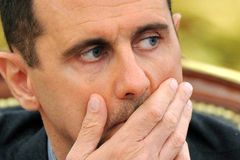