Charles Burton is an associate professor of political science at Brock University in St. Catharines, and is a former Counsellor at the Canadian Embassy in Beijing.  He was a member of the International Election Observation Mission for the Jan. 16 Taiwan election.

Taiwan's weekend election might have felt a bit familiar to Canadians. After eight years of majority rule, the Kuomintang party (or KMT), a conservative regime out of touch with the mood of society, was soundly defeated by the youthful, media-savvy Democratic Progressive Party (DPP) who promised to "Light Up Taiwan" with openness, honesty and renewed respect for the democratic process.

For the first time since 1911, the KMT — the party of Sun Yat-sen and Chiang Kai-shek — is completely out of power, as the DPP won both the presidency and a majority in the Legislature.

The campaign swung on the same issues facing most nations today: sluggish economy, widening gap between rich and poor, growing unemployment especially among young people, unsustainable pension plans and lack of affordable housing. Both parties campaigned on diversifying trade away from Taiwan's overwhelming dependence on the faltering Chinese economy. Both pledged structural changes to Taiwan's financial and economic institutions that could help Taiwan get into the Trans-Pacific Partnership trade pact.

The election is a watershed moment in Taiwan's political transformation, because the DPP refuses to bow to China's insistence that Taiwan pay lip service to China's identification of Taiwan as a province of "one China." By contrast, the KMT willingly complies on this. Indeed, it shares a consensus with China's Communist Party that Taiwan and China would eventually overcome political differences and increase economic engagement, ultimately leading to Taiwan's "return to the embrace of the motherland" in a reunified China.

But this is not the DPP's vision for Taiwan's future. In her victory speech Saturday night, President-elect Tsai Ing-wen asserted that "Taiwan is a democratic and free country" and "should not have to apologize" for its identity.

The DPP victory is a child of the Sunflower Student Movement that erupted in the spring of 2014, after the KMT rushed through legislation to enact a comprehensive goods and services agreement with China. The concern was that this agreement — and others that the KMT was in process of preparing to extend Taiwan-China economic integration — would open the way to unacceptable levels of Chinese influence in Taiwan and future economic coercion that would threaten Taiwan's political autonomy. After a peaceful student occupation of the legislature (which was met with government violence) and sustained public outcry, the KMT eventually backed off these initiatives with China, but only after considerable loss of face for themselves and the mainland Chinese Communists.

Despite the fact the DPP was elected by an overwhelming majority of voters, don't expect China to simply accept Taiwan edging to de jure independence under the new government. Tensions will rise, though a conventional war between China and Taiwan is unlikely. For starters, Taiwan has bought more than $20-billion worth of military hardware from the United States since 2008. And China's regional rival Japan has openly supported the DPP's political values over the "old politics" of the KMT. As Japan-China relations continue to sour over China's territorial expansion in waters claimed by Japan, the Japanese government will be more assertive in supporting the sovereignty of its former colony in Taiwan. China will not be happy to see this.

The coming weeks will be telling. Although the KMT lost the election, Taiwan's transition period is extraordinarily long, and KMT President Ma Ying-jeou will remain in office until May 20. As the KMT ponders the prospect of the DPP's "new Taiwan", it's not inconceivable that the KMT could take quick action to advance the "one China" program, before the DPP gains office. Indeed the U.S. has already dispatched senior envoys to both Taipei and Beijing to counsel calm and that nobody do anything rash that could threaten security across the Taiwan Straits and beyond. But one cannot rule this out scenario as a possibility, as the KMT and Chinese Communists feel backed up against a wall by the DPP's liberal politics.

Taiwan's democracy only has a history of 20 years, but this election represents Taiwan's third orderly democratic transition of power. As President-elect Tsai asserted in her press conference after victory was confirmed, democracy is now deeply ingrained in Taiwan's political culture.

Taiwanese take great pride in exercising their citizenship right to vote. For this election, many travelled long distances at considerable expense so they could get home and put an "X" on a ballot beside the name of the candidate of their choice.

Democracy is a beautiful thing. But the geopolitical reality of a rising China — not only hostile to the values of citizenship and universal entitlement to human rights, but rabidly nationalistic – means that Taiwan's democracy may end very badly.

China ought to learn from Taiwan how to become a democracy
January 14, 2016 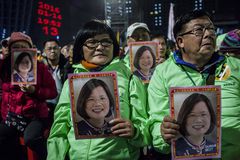 Opinion
Who will march with China at Xi’s parade?
September 1, 2015 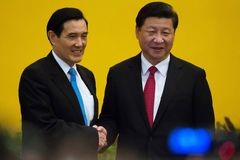