This article was originally published in April of 2016.

During a press conference on Friday, Dr. Eric Hoskins, Ontario's Health Minister, revealed that more than 500 of Ontario's 33,000 doctors bill the provincial health insurance program more than $1-million, including one ophthalmologist who billed an eye-popping $6.6-million.

The reaction to that revelation was fascinating and telling.

There was incredulity – doubt expressed that it was physically possible for a single practitioner to perform $18,000 worth of procedures daily, the equivalent of about 40 cataract operations a day for 365 days a year.

Current privacy legislation does not allow the physician's name or the details of his practice to be revealed, so there was more speculation than actual information. (British Columbia and Manitoba publish individual billing data, but other provinces do not.)

There were those who said if the billing was not fraudulent (and there is no suggestion it was), then the minister has no business complaining about the cost of services rendered. The province does not have a hard cap on billings, but it does roll back fees a bit for high billers (those over $1-million), which some interpret as punishing productivity.

There were, of course, the usual reminders that billings are not income, they include overhead; but even if overhead was 95 per cent (which is unlikely), the $6.6-million man would still clear $330,000.

Then there were those who expressed outrage that the minister would actually speak out publicly, and mildly rebuke some doctors to boot. Apparently, during a contract dispute, one side should be free to say anything – up to and including calling on Dr. Hoskins to resign – but the minister should remain silent.

There is no question Dr. Hoskins was trying to get a rise out of the medical profession. It was not a coincidence the press conference took place on the eve of a demonstration – the first time Ontario doctors have taken to the streets since 1986. Ontario's doctors have been without a contract for two years, and there haven't even been formal talks for more than a year. Both sides are trying to win the public over to their side. That's how negotiations and politics work.

What's unfortunate is that amidst the screaming, the actual positions of the Ontario Medical Association and the provincial government have been lost.

While the newspaper stories zeroed in on the $6.6-million biller, Dr. Hoskins's underlying point – that there are gross disparities and unfairness in how different physicians are paid – was largely lost.

This issue, relativity, is complex, but can be illustrated with a simple question: If a family doctor and an eye doctor are equally important, why is the latter paid markedly more?

The underlying problem is the fee-for-service model. The fee schedule – a list of 7,300 medical acts that doctors can bill for – reveals that technical and surgical interventions tend to be well-remunerated, while actually speaking to patients doesn't pay.

So, for example, the fee for a 15-minute cataract surgery, about $500, is about the same as what a doctor would get for more than three hours of psychological counselling.

The OMA, like a union should, wants its members' fees/income to increase across the board, so it is not that interested in tackling a divisive issue like relativity.

The OMA has now bet all its marbles on binding arbitration. Dr. Hoskins says he is willing to talk about it – but only at the negotiating table. The problem with binding arbitration is that while it will resolve a short-term monetary dispute, it will perpetuate the current flawed physician payment model.

As many have noted, there needs to be a fundamental rethink of how doctors are paid – not a reduction in overall fees, but a recalibration. That has to be negotiated and implemented over time.

Nobody is benefiting from the current stalemate. Doctors have had their fees unilaterally cut back – hurting the least well paid the hardest – and they are rightly bitter. The province wants to undertake broader health reforms and it needs doctors onside and engaged.

In the grand scheme of things – $11.8-billion in physician payments in Ontario alone – a $6.6-million man is an anomalous irrelevancy, but it's also a symbol of how we've lost our way in the quest to pay valued doctors properly.

Opinion
Ontario doctors’ pay must be negotiated, not imposed
April 12, 2016 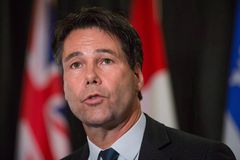