Canadians seemed surprised and perhaps even offended that the North Atlantic Treaty Organization's new Secretary-General, Anders Rasmussen, would dare hope that the Canadian Forces might stay in Afghanistan in significant numbers past the 2011 deadline set by Parliament. The attitude is that Canadians have done their share, or more than their share, and that it is time for others to carry the load.

There is much truth to the claim that Canadians have borne a disproportionate burden, suffering more casualties per soldier on the ground than nearly any other country. But this attitude suggests that Canada has been engaged in Afghanistan as a favour, rather than in its interests. And if it has been in its interest to send soldiers to Afghanistan, it is not clear why those motivations are going to dissipate in 2011.

The problem is a failure of leadership. The civilian leaders of many NATO countries with significant contingents in harm's way have tried to duck the issue because of potential domestic political liabilities rather than make the case that fighting in Afghanistan advances a variety of political goals that are not coincidental, but actually flow from their countries' values and desired roles in the world.

For Canada, three things stand out: the desire to act multilaterally and support multilateral institutions, the responsibility to protect and the wish to make a difference.

Multilateralism is in the Canadian blood as a result of its history, its relatively small population and its geographic situation. Canada cannot act alone in most areas, nor do Canadians want their country to act alone.

Moreover, it has been in Canada's interests to tie the United States in as many international institutional webs as possible so that its power is contained and directed somewhat. Canada has repeatedly gone into Afghanistan to support its ally and to support the institution of NATO in the aftermath of 9/11.

Canadian leaders have viewed the commitment to NATO as an obligation, but not just one that is for the sake of others, but an integral part of the country's place in the world. Certainly, people have a right to be frustrated with the performance of other NATO members, but leaving the job entirely to others does not mesh with Canadian values and may put the organization at risk. Afghanistan in 2011 might begin to look like Iraq in 2003 - as an American war with few constraints.

Canada promoted the idea of the responsibility to protect, making it a norm sanctioned by the United Nations. The idea is that governments ought to protect their populations rather than prey upon them. When they fail to do so, the international community is supposed to intervene and protect vulnerable people.

While development and reconstruction have not gone as well as we would like and the security situation is far from perfect, there is little doubt that the Canadian Forces are protecting the people of Kandahar. Refugees have returned to the province from Pakistan, and there is some order amid the violence. Canadian soldiers have eschewed the use of force to minimize collateral damage and have developed relationships with the local population as they seek to provide security.

Canada sees itself as a relevant country in the world, not just standing by or donating a bit of its income to the cause, but making a difference. In the past, it may have been involved at varying levels in 40 UN missions, but having no visible impact in any. In this case, Canada's contribution is abundantly clear. While it is not fighting alone (other countries have soldiers in and around Kandahar), it has taken a leading role in a difficult place.

Lastly, and widely ignored by many, Canada has gained a great deal of influence because of its willingness to lead and bleed in Kandahar. While it does not see itself as a power-seeking country, having more influence, whether it is over operations in Afghanistan or in bilateral discussions with the United States, is a significant and undervalued benefit.

If Canada withdraws most of its forces in 2011, this departure will undermine NATO as an institution, encouraging other countries to pull out; it will mean that other nations will have the responsibility to protect; it will significantly reduce the impact Canada is making; and the growth in its power and influence will be temporary.

Canadians need to decide whether to maintain the commitment to Afghanistan. It is a difficult decision, as the costs are significant in money and the sacrifices the soldiers are making, but we should fully consider the reasons why Canada has made such a big difference for the past few years.

Opinion
Canada has more choices than all or nothing in Afghanistan
April 20, 2010 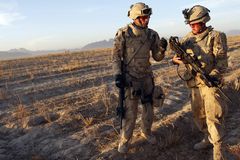 Opinion
Free and fair elections in Afghanistan? Don't hold your breath
August 17, 2009
Follow us on Twitter @globedebate Opens in a new window
Report an error
Due to technical reasons, we have temporarily removed commenting from our articles. We hope to have this fixed soon. Thank you for your patience. If you are looking to give feedback on our new site, please send it along to feedback@globeandmail.com. If you want to write a letter to the editor, please forward to letters@globeandmail.com.
Comments