Last month I stumbled across what must be the most poignant shrine in Sicily. It consists of a few rough planks of wood, painted red and blue – all that's left of a primitive boat filled with migrants desperate to reach the Promised Land. You can see it in the great baroque church in Noto. What became of the people is unknown.

Last week, tragedy struck again as more than 700 people drowned in the sea between Libya and Sicily. Wrenching pictures showed people spilling into the water as their overcrowded hulks capsized.

Why do they risk their lives? Because they're betting they'll be rescued before they die. They know their boats are death traps. They also know the rescue ships are bound by law to deliver them to Europe. Migrants told one reporter that the trafficker had given them the phone number of a rescue service to call as soon as they were in international waters.

Libyan strongman Moammar Gadhafi kept a lid on the people-smuggling trade. But after Hillary Clinton and her European allies knocked him out in a burst of do-gooder interventionism, no one could stop the smugglers. Now that the Balkan route is shut, Libya has become the main migration route to Europe. Just last week, 13,000 people were rescued and delivered to Italian shores. Last year, Italy saw more than 150,000 migrants arrive by sea, according to the UN refugee agency. Three hundred thousand or more could arrive this year, according to some estimates.

This is a different kind of migration than the one that shocked the conscience of the world last year. These people aren't fleeing for their lives, as were refugees from the Syrian war or conflict in Afghanistan. Almost all are Africans, from Gambia, Eritrea, Ghana, Niger, Nigeria. The vast majority are young men. Quite a few are unaccompanied minors, whose families believe they have a better chance of being taken in because they are legally children.

European leaders have no idea how to cope with the latest surge. Their response has been the usual combination of blame shifting, buck passing, and refusal to face the facts.

The African migrants are allowed to apply for refugee status in Italy, but few will succeed. Most will be sent to overflowing "reception centres," where they will be fed and housed for at least a year while their claims are processed. Some will be summarily rejected and ordered to leave the country right away. But no one enforces the deportation orders, and no one keeps track of the failed claimants. Most head north in search of better opportunities. Until recently, many of them left the country to become someone else's problem.

But now, they're blocked. Germany has told Italy to stop sending migrants. Austria even threatened to build a wall at the Brenner Pass if Italy can't stop the flow. Italian Prime Minister Matteo Renzi said such a move would be a "flagrant breach of European rules," which is certainly correct but probably beside the point.

Italy's latest migrant wave could set off a national crisis. Much of the country is in a near-permanent recession. And Italians feel as if the wars and unrest and the relentless population pressures of the Middle East and Africa are right on their doorstep. Imagine that you're sitting in Canada and hundreds of thousands of people – unskilled, semi-literate, culturally very different, demanding food, shelter, health care and permanent residency – were expected to pour into the country this year. That's the way Italians feel.

Lots of people believe that part of the solution lies in helping to improve African economies so that the would-be migrants would stay home. Mr. Renzi and German Chancellor Angela Merkel want Europe to offer financial incentives to stimulate economic development. A billion euros might help, Ms. Merkel says. But nobody agrees on who should pay. And it's difficult to imagine that even generous bribes would do the trick. The human-smuggling business, enabled by cellphone technology, is hugely profitable. And the allure of Europe's wealth is extremely strong.

Ironically, the great migration from Africa is only possible because people are no longer desperately poor. Millions of people are now able to scrape together the few thousand dollars they need to buy their way to Europe. Meanwhile, the population of Africa is exploding. By 2050, it is expected to double to 2.4 billion people, roughly four times the size of Europe.

Europe's current migrant problem, in other words, is just a taste of things to come.

Opinion
I was bumped from speaking to the House. I need to say this: Migrant workers need better rights
May 24, 2016 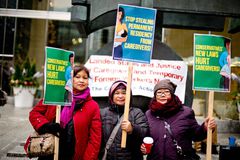