Stephen Harper sets off a lot of people. They react to him with visceral dislike. Now that we're in election mode again, the dinner parties with my friends (we live in the heart of 416) always serve up large helpings of Harper-bashing. My friends are all highly intelligent and thoughtful people. But they regard him with a loathing that other people reserve for Mussolini or Gadhafi.

What makes it worse is they know that Michael Ignatieff can't possibly beat him. They actually want Mr. Ignatieff to give a speech that says, "People, I may not be charismatic, but I'm sincere. You've got to vote for me to save the country!"

It's impossible to debate the issues with my friends, because their opinions are so bathed in emotion. Mr. Harper could rescue drowning kittens from raging rivers, and they'd still suspect he had a hidden agenda in it.

But it's no good blaming them. When it comes to politics, most of us react with our paleomammalian brain. We only think we're basing our preferences on reason. The neuroscientific evidence is overwhelming that we form our opinions first, then find the facts to back them up. Our limbic system and our amygdala - "the busy little part of the brain involved in fear and emotion," as New York Times columnist David Brooks called it - are doing most of the decision-making for us.

Something may be wrong with me, but Mr. Harper doesn't make me crazy. I see him as a smart, nerdy introvert with a control streak. He's not emotionally gifted. And he really believes that the other guys would wreck the country. But he's unable to articulate a vision of the country that feels inclusive, or speaks to our higher aspirations. When he starts lecturing us about the malign intentions of the opposition, I feel like an 11-year-old being hectored by a schoolmaster who believes that his students are especially slow.

Elections are won by people who inspire confidence and hope. But it's a lot easier to whip up fear and loathing. So forget the contest of ideas. The major battleground of this election is the amygdala. Which word triggers a more visceral response - "coalition" or "contempt"? Which makes you angrier - the idea that Mr. Ignatieff might try to take over as the unelected prime minister (even though he's denied it), or the fact that the Conservatives were found in contempt of Parliament (even though it only happened because the opposition parties outnumbered them)? Whatever your response, I guarantee that it has merely entrenched your views, not changed them.

The conventional wisdom is that campaigns matter. But not so much this time, I suspect. There are no big issues in the air (free trade, the HST, unity) that really matter. People think the country is basically headed in the right direction, and the biggest influence - by far - on how people vote is the way they feel about the economy. (According to one recent poll, nearly two-thirds of respondents said the economy was the most important election issue. Only 12 per cent said ethics.) So what if it was Liberal governments that did the economic heavy lifting? Mr. Harper is the guy in charge now.

In other times, Mr. Ignatieff might have had a shot. He's a far better leader than Stéphane Dion was (and is also intelligible in English). He's much smarter and more credible than some prime ministers we've had. (Kim Campbell, anyone?) But everything is stacked against him. The centre-right is united, the centre-left is split and the Liberals have virtually lost Quebec. The ruling party hasn't worn out its welcome yet (it hasn't been in office long enough), and none of its various scandals involve large bags of cash.

Most important, the voters' paleomammalian brains are not in particularly high distress. It's a perfect storm for Iggy, and my friends can't rescue him. The only question is how many seats the Liberals will lose. 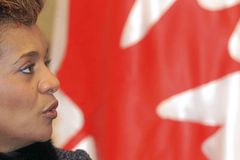