The sixth-month anniversary of Haiti's earthquake is an opportunity to take stock of what was achieved on the humanitarian side, and what more could have been done. This is not a theoretical exercise. We need to make sure that, when the next major disaster happens, we improve our response.

A huge amount was achieved by the authorities and the international community in the weeks and months that followed the quake. Many lives were saved, and are being saved today, because of the relief effort. One of the most successful search and rescue efforts even pulled many from the rubble when all hope seemed to be gone. About four million people have received food assistance, and more than a million clean water and temporary shelter. About 200,000 people have participated in cash-for-work programs, benefiting an estimated one million Haitians. No major epidemics have struck. No second disaster has followed the first.

Haiti was unusual - almost unprecedented - because of the local scale of the disaster, and the difficulties of the urban, capital city context. The quake is estimated to have killed a quarter of a million people and affected almost one-third of the Haitian population. It was the most significant disaster requiring a large-scale international response since the Pakistan earthquake of 2005. And it was a major test of the capacity, resources and response readiness of the global humanitarian community. I believe we passed that test for the most part, but important lessons were learned that must be applied if we're to do even better next time.

Co-ordination and leadership were a challenge from the beginning, given the chaotic circumstances in which so much local capacity had been destroyed or disrupted. The humanitarian community's agreed mechanisms kicked in straightaway - the so-called cluster approach - bringing together the key actors in the main sectors. This made a huge difference to the coherence of the effort. But more resources were needed to make these mechanisms work even better. And the influx of hundreds of humanitarian organizations to a major disaster such as this, many of whom, while well-meaning, are not necessarily professional and well-informed in their approach, posed a huge challenge. A new system of certification of capacity and experience needs to be looked at.

The presence and assets of powerful military entities, particularly the United Nations Stabilization Mission in Haiti but also from the U.S. and Canada, presented both opportunities and challenges. Humanitarians required the support of the military in facilitating the transport and distribution of assistance, and dealing with basic problems such as running the airport and repairing the port. The establishment of co-ordination structures engaging both military and humanitarian actors was critical to the success of the operation. But keeping all these actors, including the major bilateral donors, on the same page was also a huge issue. We need to learn how to work together more effectively and naturally.

Many countries wanted to send help, and filled planes with goods and sent them off. But the goods were not always was what was needed, and there was not always an identified organization at the other end to distribute these goods. The World Health Organization is still spending tens of thousands of dollars destroying out-of-date or unneeded medical supplies. Clearer advance guidance is needed about what really helps in these disasters - mostly money for the organizations that know what they're doing. And global stockpiles of necessary goods, such as tents and tarpaulins, need to be looked at again.

The international humanitarian community did not show itself to be sufficiently sensitive to the concerns and capacities of local civil society, and did not listen enough to what the people whose lives had been destroyed by the quake were saying. This mistake, of course, has been made before - in the wake of the 2004 Indian Ocean tsunami, for example. It leads to misjudgments about what is needed and errors in strategy that have to be corrected. In this case, it was compounded by too much use of English in the co-ordination mechanisms and difficult access for local NGOs to the UN base where most meetings were being conducted. It is an area where we really must do better.

As the reconstruction of Haiti gets under way, the humanitarian operation will still be needed for months. We have a huge amount to do, not least to provide better shelter for the almost 1.5 million people living under tarpaulins. The risks from the rainy and hurricane seasons remain very great. More resources are needed from donors to keep the relief operation running.

So there's no question of relaxing and just reflecting on the lessons. But the lessons still have to be learned and applied for the future. And the biggest lesson of all is the need to reduce the risks of disasters before they happen, through measures such as enforced building codes, and to prepare for them more systematically, not just to respond effectively to them afterward. If building Haiti back better means anything, it means making sure its people are never again as vulnerable to disaster as so many were on Jan. 12, 2010.

Opinion
Grandiose dreams and grim realities in Haiti
May 9, 2018

Canada's ministers wait for word from Mr. Clinton
May 2, 2018 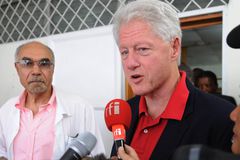 Canada's role in Haiti
April 13, 2018
Follow us on Twitter @globedebate Opens in a new window
Report an error
Due to technical reasons, we have temporarily removed commenting from our articles. We hope to have this fixed soon. Thank you for your patience. If you are looking to give feedback on our new site, please send it along to feedback@globeandmail.com. If you want to write a letter to the editor, please forward to letters@globeandmail.com.
Comments