Yves Boisvert is a columnist with La Presse

One month on, the comeback effect seems to be fading for Bloc Québécois Leader Gilles Duceppe. Even with its old leader back in the saddle, the Bloc faces a dilemma in the coming federal election: How do you attack Stephen Harper's Conservative government without pushing voters into the arms of the New Democrats?

For the Bloc, which was reduced to four seats in the House of Commons from 49 in the 2011 election, this is more than a strategy problem. It is an existential crisis. The relevance of the dwindling independence party in the federal Parliament has even been put in doubt by the new Parti Québécois leader, Pierre Karl Péladeau.

More importantly, NDP Leader Thomas Mulcair, on a national level, is increasingly seen as a viable alternative to Mr. Harper, and has managed to become one of the most trusted politicians in Quebec.

In a recent opinion poll, Mr. Mulcair was ranked a close second in the province, just behind the new star of Quebec politics, the omnipresent and hyperactive mayor of Montreal, Denis Coderre.The NDP Leader even managed to outperform Quebec City Mayor Régis Labeaume, who was re-elected with 74 per cent of the votes and has been a crowd-pleaser for 10 years.

It seems as if the public sympathy for the late NDP leader Jack Layton has been transferred to his successor. Those who argued that the success of the New Democrats in 2011, especially in Quebec, was a flash in the pan or a moment of political folly in response to Mr. Layton's amiable character may have to think again.

With Mr. Harper being the most disliked politician in Quebec, and with his Conservatives ranking fourth in opinion polls in the province, the appetite for change is strong. So, if you are Mr. Duceppe, and cannot offer a governmental alternative, as Mr. Mulcair can, what do you do? You attack "Canada," not the Conservatives.

The message of the Bloc is that Canada itself – not the Harper government – has a shameful record on environmental issues. Quebec's record is exemplary, the narrative goes, but "Canada" drags us down.

Same goes for cultural issues: When funding cuts were made in 2008, Quebec was "the only one" to express outrage, the Bloc says. It seems Bloc officials missed some headlines in Winnipeg newspapers. And who cares if the federal government spends as much in Quebec as it does Ontario for culture? A sense of injustice and exception has to be created.

The idea is that by its very essence, "Canada" – not just whatever party happens to be governing – makes it impossible for Quebec to express its true nature and "values."

This, of course, is to prevent the argument that voting for the Bloc would only help keep the Harper government in place, as happened in the 1990s, when the strength of the Bloc in Quebec and Reform in the West served Jean Chrétien's Liberals.

The Bloc needs to create for Quebec voters the image of a "Bloc Canada," in which all federal parties are more or less the same. They cannot serve Quebec's interests because most of their supporters are in other provinces, the Bloc says.

The Bloc also hopes new enthusiasm for independence will emerge from Jacques Parizeau's death. Former PQ MNA Jean-Martin Aussant, little known to the public but considered a rock star in the independence movement, is back in Montreal after a few years in the finance business in London, and is expected to play a role in the revival of a struggling movement.

Meanwhile, the pressure is on Mr. Duceppe. 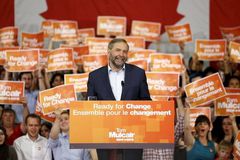 Opinion
Hard questions for Duceppe, and the Bloc Québécois
June 11, 2015

Opinion
Why the Orange Wave is still rolling across Quebec
May 28, 2015