Gordon Gibson is the author of A New Look at Canadian Indian Policy: Respect the Collective – Promote the Individual.

The Supreme Court's Tsilhqot'in Nation decision marks a very dark day for the economy of British Columbia. A new era of chaotic jockeying will open among First Nations, governments and resource proponents, casting a pall over a basic economic driver of the province. Here's why.

Imagine that you have been involved in a very long, very important negotiation extending over years, a power struggle in a game with uncertain rules, with each side holding its cards very close to the vest. Imagine some progress is finally being made, and then into the room walks an outsider who hands one side four aces and a joker. The situation is suddenly entirely new and no one knows quite what to do. The wheels fall off for a long time – this is what this decision will do to the B.C. treaty negotiation and "reconciliation" process.

Alarmist? No. It's exactly what happened in 1997, when the Delgamuukw decision on aboriginal title came down, an equally momentous event. The negotiators on all three sides (federal, provincial and aboriginal) took years to regroup, but progress was again being made – until the Tsilhqot'in decision.

The Supreme Court has now defined aboriginal title in an expansive way. Title confers the exclusive right to control that land in a much stronger manner than ordinary Canadians with private property. Any activity on that land must have consent from the relevant nation. (This award of 1,700 square kilometres was to a small subgroup of the Tsilhqot'in Nation. There are about 200 Indian Act Bands in British Columbia.)

The key word is "consent." The old rule was "consultation and accommodation if required." Lacking consent, governments still have a right to "infringe" on title in certain circumstances but must pass high hurdles of justification – another recipe for litigation.

This is a major shift in the balance of power and will rightly elevate aboriginal expectations. But the other side is that deals will freeze until things are sorted out, which is bad for everyone. This first award of aboriginal title will surely result in a mushrooming of claims throughout the province.

The upshot will be that major resource projects, pipelines, mines and the like will face the kind of uncertainty that investors hate. (The new certainty will be more litigation.) Many projects will simply be abandoned and new opportunities will be spurned. There are British Columbians who will say, "Hooray!" These are the sort who believe that money comes from banks and food comes from supermarkets and don't understand what pays for health care.

This commentary does not dispute the justice of First Nations claims, nor give any credit to governmental wisdom. The treatment of our First Nations has been awful. For four years, I sat on the Gitxsan Nation's side of a treaty table and will say without hesitation that governments were not bargaining in good faith. Our proposals were imaginative and negotiable. The government representatives' mandates are narrow and inflexible – everyone agrees with that. The blame for the current situation lies squarely in the fat laps of governments.

So, we have a mess. B.C. Premier Christy Clark has a natural-gas pipe dream for provincial riches. Stand by for aboriginal title claims all along the proposed routes under the new law, which will allow significant new attempts at toll-gating. This will either frighten off proponents or eat up the province's hope of tax revenues. We have a narrow window on liquid natural gas, which may now close as competitors occupy the markets.

Mining was making a comeback in B.C. Then the giant New Prosperity project was shot down, with aboriginal objections a major factor. Look for more of this while the new world of aboriginal title gets sorted out.

The solution, if any, comes in two parts. The first is to genuinely treat First Nations claims with respect. The provincial government has made a lot of progress, but Ottawa remains in the dark ages. It is going to cost a lot of money – many, many billions – and take a lot of cabinet time, but so it should.

The second part is being honest with everyone. It is the duty of governments to facilitate the development of the economy, and they are going to have to firmly lay down rules that all parties will be able to rely upon. Governments have been politically frightened of aboriginal peoples since Oka, but they still have a duty to the general public.

There is an honourable way out, but, alas, it involves facing the facts. 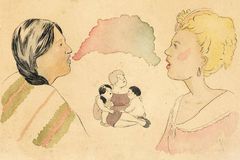