For many years, the United Church was a pillar of Canadian society. Its leaders were respected public figures. It was – and remains – the biggest Protestant denomination in a country that, outside Quebec, has been largely shaped by centuries of Protestant tradition.

But today, the church is literally dying. The average age of its members is 65. They believe in many things, but they do not necessarily believe in God. Some congregations proudly describe themselves as "post-theistic," which is a good thing because, as one church elder said, it shows the church is not "stuck in the past." Besides, who needs God when you've got Israel to kick around?

The United Church is not alone. All the secular liberal churches are collapsing. In the United States, the Episcopalians – facing many issues similar to those of the United Church – have lost a quarter of their membership in the past decade. They're at their lowest point since the 1930s. Not coincidentally, they spent their recent general meeting affirming the right of the transgendered to become priests. Not that there's anything wrong with that. But it doesn't top most people's lists of pressing spiritual or even social issues.

Back in the 1960s, the liberal churches bet their future on becoming more open, more inclusive, more egalitarian and more progressive. They figured that was the way to reach out to a new generation of worshippers. It was a colossal flop.

"I've spent all my ministry in declining congregations," says David Ewart, a recently retired United Church minister who lives in British Columbia. He is deeply discouraged about the future of his faith. "In my experience, when you put your primary focus on the world, there is a lessening of the importance of worship and turning to God."

The United Church's high-water mark was 1965, when membership reached nearly 1.1 million. Since then it has shrunk nearly 60 per cent. Congregations have shrunk too – but not the church's infrastructure or the money needed to maintain it. Today, the church has too many buildings and too few people to pay for their upkeep. Yet its leadership seems remarkably unperturbed. "It's considered wrong to be concerned about the numbers – too crass, materialistic and business-oriented," says Mr. Ewart. The church's leaders are like the last of the Marxist-Leninists: still convinced they're right despite the fact that the rest of the world has moved on.

Clearly, changes in society have had an enormous impact on church attendance. Volunteerism and other civic institutions are also in decline. Busy two-career families have less discretionary time for everything, including church. Sundays are for chores and shopping now. As for Sunday school, parents would rather take the kids to sports.

But something else began changing in the 1960s, too. The liberal churches decided that traditional notions of worship were out of date, even embarrassing. They preferred to emphasize intellect, rationality and understanding. "When I went to seminary, we never talked about prayer," says Mr. Ewart. "I had an intellectual relationship with Jesus. But love Jesus? Not so much."

As the United Church found common cause with auto workers, it became widely known as the NDP at prayer. Social justice was its gospel. Spiritual fulfilment would be achieved through boycotts and recycling. Instead of Youth for Christ, it has a group called Youth for Eco-Justice. Mardi Tindal, the current moderator, recently undertook a spiritual outreach tour across Canada to urge "the healing of soul, community and creation" by reducing our carbon footprint. Which raises the obvious question: If you really, really care about the environment, why not just join Greenpeace?

According to opinion polls, people's overall belief in God hasn't declined. What's declined is people's participation in religion. With so little spiritual nourishment to offer, it's no wonder the liberal churches have collapsed.

It's possible that organized religion in the developed world has had its day. After all, even conservative evangelicals like the Southern Baptists are in decline. Yet not all faiths have succumbed to Mammon. Mosques are popping up all over, and in Canada there are probably more kids in Islamic class than Sunday school. In the United States, Mormonism – which strongly encourages missionary service and expects members to pay a hefty tithe – is going strong, despite widespread ridicule from the mainstream press. Thanks to immigrants, the U.S. Roman Catholic Church also remains vibrant. Most Jews I know still belong to synagogues, send their kids to Hebrew school and have them bar mitzvahed.

Should anybody miss the church? Yes, says Mr. Ewart. The church gave families a way to participate together in a community larger than themselves, for a purpose greater than themselves. Most of us don't have a way to do that any more. Our kids won't even have it in their memory bank.

In the past few years, Mr. Ewart has spent time hanging out with evangelicals – people who actually talk about loving Jesus. He admires their personal, emotional connection to God. Lately, he has even started praying. Perhaps he could pray for the church in which he spent his life to stop its self-immolation. But it's probably too late.

The Episcopalian Church in the United States is equivalent to the Anglican Church of Canada and not the United Church. Mormons are strongly encouraged, but not required to do mission work. An earlier online version of this story, and Saturday's original newspaper version, were not clear. 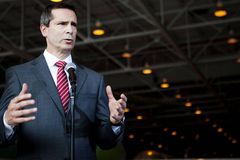 Opinion
We need the Bible, if only to understand
May 4, 2012 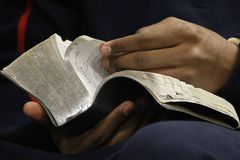