The Saudi Arabian oil minister's recent comment that the world's largest petroleum producer sees a postfossil-fuel world in which his country becomes a solar-power superpower must have comforted climate activists that even the worst offenders can come around. After all, what could be more redemptive than turning abandoned oil fields into solar farms?

Solar power's image as "clean" and "limitless" has led princes and politicians alike to dole out huge subsidies to bask in its glow. Under the 2009 Green Energy Act, Ontario agreed to pay solar power operators as much as 10 times the market rate for the electricity they produce under 20-year contracts.

Not satisfied with risk-free deals that will make many solar players rich at consumers' expense, Ontario's solar industry is now lobbying for even more. And it's leveraging solar's apple-pie image to press politicians into giving it what it wants.

On Tuesday, the Canadian Solar Industries Association (CanSIA) released a poll purporting to show that three-quarters of Ontarians "would like to see the government invest more in solar powered electricity and in technologies that enable solar power." The same proportion apparently supports reserving revenue from Ontario's proposed cap-and-trade scheme for more solar power and related technologies.

The folks at CanSIA are no fools. They hired the chief strategist behind Premier Kathleen Wynne's 2014 re-election to do their polling. And David Herle put just the right spin on the results, saying, "Those who voted Wynne's Liberals into power are looking to government to pursue opportunities presented by the solar industry."

It's not clear if these voters would be as gung-ho about solar power, however, if they considered the environmental implications of its expansion. The industry doesn't talk much, or at all, about the downsides of manufacturing solar panels or where all these panels will end up when they conk out. Think of how much toxic waste is generated by consumer electronics and you get a small inkling of what a world lit with solar power, and the batteries needed to store their energy, might look like.

Solar power is still a marginal energy source, accounting for about 1 per cent of global electricity production. Yet, its environmental impact is already considerable, according to the Silicon Valley Toxics Coalition. The San Francisco-based group started out three decades ago tracking the e-waste produced by high-tech industry. It now produces an annual Solar Scorecard on panel manufacturers that depicts an industry that has got worse over time. Most producers refuse to provide any environmental data on their supply chains or manufacturing operations at all.

"We need to take action now to reduce the use of toxic chemicals in [photovoltaic production], develop responsible recycling systems and protect workers throughout the global PV supply chain," the coalition said in its latest report.

The main factor behind declining costs for solar panels – the shift in production to China – has also made their environmental impact harder to track and regulate. Manufacturing solar panels is energy intensive. Depending on where they're made, the panels need to produce emissions-free electricity for quite a long time to make up for the greenhouse gases generated by their manufacturing. Their components, which include several so-called conflict minerals, are often mined in countries with weak health and safety regulations.

Imagine a world, then, in which solar power actually accounted for a major, rather than marginal, share of electricity generation. And consider the massive increase in battery production that would be needed to store all this energy, since the sun only shines intermittently.

Making electric batteries is even dirtier than making solar panels. Ask the poor Chinese folk whose crops, air and water have been ruined by the "graphite rain" generated by nearby mines. The average smartphone contains about 15 grams of graphite, but an electric car battery contains 50 kilograms of it.

Solar power surely has a role to play in combating climate change. But it is not the angelic solution to the world's energy problems its backers suggest. It could even create a whole new set of environmental woes that will require a new set of elusive global protocols to tackle.

Who's polling Ontarians about that? 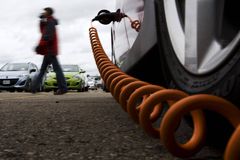