After a week marked by fear and panic stoked by the demagoguery of the GOP convention, Michelle Obama stood before America and said:

"I wake up every morning in a house that was built by slaves."

She did not mean it figuratively. Unable to recruit European workers, D.C. commissioners in 1792, forced African-American slaves to construct the White House in which the First Lady, herself a descendant of slaves, would reside.

Ms. Obama's was a brutal line, and a necessary one – because it is true. It is a truth often glossed over in U.S. textbooks and omitted from the markers on our glorified monuments. It is a truth that has shaped the election, which boasts starker racial divides in both the Democratic primaries and likely in the general election than any other before. It is the truth of America's legacy of racial injustice – an injustice that, when denied or dismissed, only perpetuates itself further.

It was refreshing to watch a convention and hear someone tell the truth. It has been a while since that happened here.

Ms. Obama went on to a warmer vision – "And I watch my daughters, two beautiful, intelligent, black young women playing with their dogs on the White House lawn," she continued – but her earlier line set the tone for a strikingly different image of the U.S. than the one presented by the Republicans the week before.

The Republican National Convention relied on two false narratives: nostalgia for an American ideal that – as Ms. Obama's example shows – never existed for all, and proclamations of future chaos that can only be stopped by Donald Trump. There were no substantial policy plans presented, unless you count imprisoning Hillary Clinton as a policy. Mr. Trump's primary policy is the glorification of Mr. Trump.

The GOP convention has been criticized for its emphasis on American pain, but that was not the real problem. This is an era of pain, both in terms of recent tragedies – police killings and murdered police, terror attacks in the U.S. and abroad – and the erosion of economic stability that has left so many Americans suffering since the 2008 recession.

But this was not the way the GOP depicted American pain. In their version of U.S. history, pain is delivered upon good Americans – the working class, unsubtly coded as white – by bad Americans: non-white immigrants and members of the Democratic Party, whose racial and ethnic diversity stands in sharp contrast to the GOP ranks.

The speakers at the Democratic convention also spoke of pain: of racial and ethnic discrimination, of the fear of deportation, of discrimination against LGBT citizens, and of economic hardship. What they did not do is blame fellow citizens for their problems in the personal, almost primal way that Mr. Trump does. While they criticized GOP policies and obstructionism, they also focused on specific policies – an increase in the minimum wage, free higher education, a path to citizenship for immigrants – that would improve the lives of citizens.

The final and most anticipated speech of the night, that of Bernie Sanders, echoed this theme. Mr. Sanders won admirers by bluntly depicting the economic suffering many experience, and rightly presenting it as a fundamental betrayal of the American worker. He spoke of poverty, debt, and environmental ruin – essentially giving his stump speech with two distinct changes: a harsh refutation of Mr. Trump, and a proclamation that Ms. Clinton shares his concerns and supports his solutions. His was not an optimistic speech, and it should not have been. Like Ms. Obama's, his speech contained admission of American failures, with the promise of better days ahead – a promise fulfilled not through persecution, but through collaboration.

"It is no secret that Hillary Clinton and I disagree on a number of issues," Mr. Sanders said. "That's what democracy is about." As futile cries from the "Bernie or Bust" crowd rang out, Mr. Sanders buried the hatchet, and it landed squarely in Mr. Trump's vicious fantasy. Mr. Sanders, Ms. Obama, and others presented an America flawed, but not fatalistic.

Their America is not bound to illusions of the past or fears of the future, but to honest confrontation of its troubled state – and a refusal to let its redemption be stolen by a demagogue lying in wait. 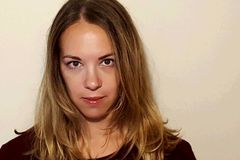 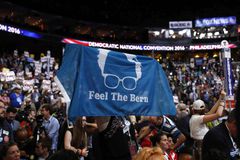