Timothy Garton Ash is professor of European Studies at Oxford University and a senior fellow at the Hoover Institution.

There is war in Europe. No, I'm not using the historic present tense to evoke August, 1914. I'm talking about August, 2014. What is happening in eastern Ukraine is war – "ambiguous war" as a British parliamentary committee calls it, rather than outright, declared war between two sovereign states, but still war. And war rages around the edges of Europe, in Syria, Iraq and Gaza.

I do not say "Europe is at war." Most European countries are not directly engaged in armed conflict. Still, we should be under no illusions. For decades, we have lived with the comforting notion that "Europe has been at peace since 1945." This was always an overstatement. In parts of Eastern Europe, low-level armed conflict continued into the early 1950s, followed by the Soviet invasion of Hungary in 1956 and of Czechoslovakia in 1968. In the 1990s, the former Yugoslavia was torn apart in a series of wars.

For all the differences, the dirty little wars of 2014 have an important connection to the horrendous "great" one that began in 1914. Many of them involve struggles of definition and control over patchwork territories left behind by the multiethnic empires that clashed 100 years ago, and their successor states. Thus, for example, the battle for eastern Ukraine is about the boundaries of the Russian empire. Some of the Russians, from Russia itself, who are now leading the armed pro-Russian movement in eastern Ukraine, have characterized themselves as "imperial nationalists."

During the Balkan wars of the 1990s, jigsaw pieces from the Austro-Hungarian and Ottoman empires were fought over, and then reassembled into new, smaller puzzles, such as Bosnia, Kosovo and Macedonia. Many of the frontiers on today's map of the Middle East go back to the post-First World War settlement, when Western colonial powers spliced together disparate parts of the former Ottoman Empire into new protectorates – Iraq, Syria, Palestine. The big exception is of course the state of Israel; but that, too, can trace a lineage back to the deadly after-life of European empires. For Nazi Germany, which attempted to exterminate the Jews, was the last hideous fling of German racial and territorial imperialism.

So what is Europe going to do now about its own long-term consequences? The first thing Europeans must do is simply to wake up to the fact that we live in a dangerous neighbourhood. Being Greater Switzerland is neither a moral nor a practical option: not moral, because Europeans, of all people, should never be silent while war crimes are being committed; not practical, because we cannot insulate ourselves from the effects. Today's fighters in Syria will be tomorrow's terrorists in Europe. Today's dispossessed are tomorrow's illegal immigrants. Let these little wars burn, and you will be shot down out of the sky on your way from the Netherlands to Malaysia on Flight MH17. No one is safe.

Whereas in the past the irresistible wake-up call was the annexation of a territory, most West Europeans slept through Vladimir Putin's Anschluss of Crimea. As Stephen Holmes and Ivan Krastev point out in Foreign Affairs, the shooting down of the Malaysian airliner on July 17 was a turning point, not least because commercial air corridors are the place where businesspeople live. Without that transformative event, it is unlikely Chancellor Angela Merkel could have persuaded German public opinion, and German business, of the need for tougher sanctions on Mr. Putin's Russia.

But what use is the EU's slow, soft economic power against the Kremlin's rapid, hard power? Or, indeed, against all the rapid hard powers of the Middle East? What use is butter against guns? The answer is: more than you might think. Europe alone cannot stop war in the Middle East. Only working with the U.S., and with some more co-operation from – of all places – Russia, can it bring peace to Syria or Gaza. It does, however, have the power to punish Russia for having its artillery shell the regular Ukrainian army, from Russian soil, while that army tries to reconquer its own territory.

Even the minor sanctions that Europe has thus far implemented have been gnawing away at the edges of the Putin regime. The larger sanctions Europe agreed to this week will, with time, have a larger impact. Liberal democracies are usually slower to act than dictatorships, and a voluntary community of 28 such democracies is bound to be slower still. Economic measures take more time to bite than military ones, but they can be more effective in the end.

One hundred years ago we had "the guns of August," in Barbara Tuchman's resonant phrase. Now we have the butter of August. Note the different role played by Germany, then and now. Slowly, step-by-step, the Berlin government is doing the right thing. Germany is bringing the unique weight of its economic relationship with Russia to bear, while quite reasonably insisting that the pain is shared with France, Britain and Italy. Some things do change. Some even get better. 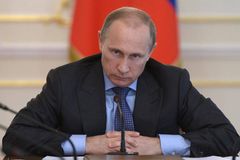