The juxtaposition called to mind the disappearance of moderate conservatives – and Flora, as everyone called her, was defiantly one of those – from the Conservative political world.

Mr. Harper personally, and his party in general, has no time for what used to be called "Red Tories," or moderate conservatives of the kind that used to populate the former Progressive Conservative Party. Mr. Harper dislikes these kinds of people even more than New Democrats and Liberals, who were never part of the conservative world.

When Mr. Harper, an early Reform Party advocate, entered politics, it was to transform the conservative world into a political force with much sharper ideology, less inclination to compromise (or temporize as he saw it), less interest in finding common ground with others, in Canada or abroad. It would be a party of steel, but without much of a heart.

Mr. Harper has been spiteful toward these moderate conservatives. He refused to attend the ceremony for the unveiling of the official portrait of former PC prime minister Joe Clark in the House of Commons. Naturally, the Prime Minister spurned Ms. MacDonald's funeral, although NDP Leader Thomas Mulcair attended, a classy act.

Today, moderate conservatives are without a political home. Ms. MacDonald in her later years leaned to the NDP; other moderates still vote Conservative but with little enthusiasm.

They are without any influence in the party, witness to which was the sad capitulation of Peter MacKay, once considered a moderate, to the shrill talking points of the new party. He parroted the party line as the price for being in power, but was a marginal figure in cabinet despite his lofty titles as justice and defence minister. Now he is leaving, but not before showering Nova Scotia with money.

The virtually complete disappearance of moderate conservatives within the Harper Conservative Party mirrors, and draws inspiration from, the general drift toward sharper conservative ideology throughout English-speaking democracies.

The party has become hard-edge on every issue from immigration to defence, from fiscal policy to abortion, with an array of candidates for the party's nomination trying to outdo the others in strident ideology. When Jeb Bush portrays himself as a moderate, he mocks the word but also endangers his chance of winning. Not one candidate reflects what Lincoln once suggested leadership should be about: to seek the "better angels of our nature."

In Britain, prime minister Margaret Thatcher systematically weeded out the "wets," or moderates, from her Conservative Party, although some of them (Geoffrey Howe, Nigel Lawson, Michael Heseltine, inter alia) got their later revenge by contributing to her loss of the leadership. "Wet thinking" has never returned, and Little England has never been stronger.

In Australia, Mr. Harper's friend Tony Abbott (who is in desperate political trouble and has abandoned anything approximating a balanced budget) takes a much more hard-edged approach than the man from whom he wrested the Liberal Party leadership, the widely respected (outside his party), urbane and worldly Malcolm Turnbull.

Canadian conservatism offers a domestic twist to this pattern of thinking in what is sometimes called the "Anglosphere" about the incapacity of the state to solve social and economic problems – a political pattern that has been supported in think tanks, the right-wing media and among conservative intellectuals.

The Manning Institute, based in Calgary, and the distinctly conservative program to teach would-be politicos and staffers at Carleton University in Ottawa, are part of a successful institutional attempt to buttress this way of conservative thinking.

The older conservative idea of society as an organic whole and of the state's capacity to defend and promote a common, collective interest, remembering the less fortunate among us, has all but disappeared in the Conservative Party.

Opinion
With Liberals squeezed out, a new two-way race
August 3, 2015 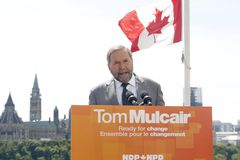