The role of digital communications in the federal election campaign is generating a significant amount of buzz, leading some journalists to call this Canada's "first social media election." Unfortunately, the frequent use of new online tools is no substitute for compelling content.

Political parties are using digital channels primarily as new funnels, within which they pour talking points from speeches, sound bites from media appearances, cut-and-pasted bullets from press releases and after-the-fact event updates. This isn't unacceptable - more dangerously for our democracy, it's uninteresting.

Less than a week after the writ was dropped, Sysomos's monitoring team measured 2,500 blogs, 10,000 online news articles, 2,600 forum posts and 72,000 tweets regarding the election. An even louder din of digital static will crackle in the weeks ahead. We'll hear from an interesting mix of Canadians, many of whom are candidates and most of whom are far more fluent in social media and online publishing than they were in 2008, their last shot at election-related political punditry or candidacy. But how many candidates are saying anything online that would actually spark a conversation?

While the hype surrounding online tools is intoxicating, scrutinizing party leaders' Twitter followers, Facebook friends, blog mentions and app downloads is simply examining numbers that websites yield easily. In the same way that advertising and public-relations industries flaunt circulation numbers and "impressions," digital data need to be taken with a grain of salt. Too often, frequency and "output" is confused with actual conversations and interaction between candidates and citizens. Political advisers with experience on the ground understand that speaking to citizens openly encourages dialogue and results in voter turnout.

Sadly, the bar for voter turnout is very low. Less than 40 per cent of citizens under 25 could be bothered to devote 20 minutes to vote in 2008. When it comes to reigniting interest, U.S. President Barack Obama's use of digital tools to increase volunteerism and interest among disengaged citizens is a favourite case study. Surprisingly, few of his tactics have been executed north of the 49th parallel.

Mr. Obama's mobile app, launched in October of 2008, boasts features in which Canadian parties are unwilling or unable to invest. The mobile strategy was anchored by a stream of encouraging messages sent via SMS text, a primary means for young volunteers and supporters to communicate. Strategists also properly formatted a mobile version of the website, integrated an interactive voice response channel and mobile-friendly videos, which contributed to an unprecedented number of logged calls, attendance at primaries, frequent donations and better-informed voters.

Mr. Obama's digital approach was developed as an ongoing strategy with a belief in interaction and citizen input. Most Canadians are eager to receive updates tailored to their interests and profile, from local businesses, broadcasters and their friends. There's no reason why candidates can't do the same with online tools and some common sense. Simply reorienting an online strategy - from a "broadcast" model to a "conversational" tone - would encourage discourse in every riding.

A glimmer of hope lies in the coming live-streaming of NDP and Liberal leaders' town hall meetings, with the leaders fielding questions submitted by online viewers. While a far cry from blogger relations or a personalized approach to Twitter (instead of debate-date bravado), it's a start.

Despite digital natives' grumblings about boomers fumbling toward mediocrity, a longer-term benefit is worth noting. Digital literacy will be at a new high when Parliament resumes. We're lucky to live in a country where candidates, staffers and strategists can experiment with online tools. Regardless of the stale content or stilted approach, this is a step in the right direction.

Let's hope the candidates will maintain their enthusiasm for the tools and transfer this energy to creative, engaging and interactive approaches to public consultation, policy discussions, information-sharing and citizen input.

Meghan Warby is a digital communications consultant in Toronto. 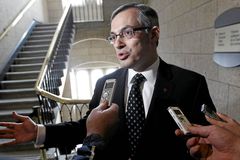 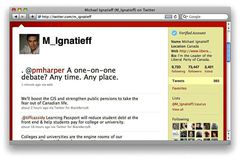 Tweeting about the election? Prepare for backlash
March 30, 2011 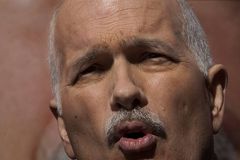