To name a mass atrocity as enormous in scale and as heartbreaking in detail as what Syrian President Bashar Hafez al-Assad's forces did to retake Aleppo from his civil-war opponents this week after four years of heartless siege, you have to reach deep into the previous century. Nothing in this century – and it has had several mass atrocities – has come close to the 400,000 lives lost, the 10 million rendered homeless, the gas attacks, the barrel-bombing of residential districts, the mass executions, the denial of medical assistance, the forced starvation and torture delivered by Mr. al-Assad.

The fall of Aleppo, delivered with massive Russian support and no concern at all for humanitarian law, UN Security Council resolutions or basic human decency, is a decisive moment: It means Mr. al-Assad will remain nominally in control of the most important parts of Syria. But it is not a terminal moment: His artificially engineered hold on power virtually guarantees the atrocities will continue, the civil war will not be resolved and chaos and extremism will reign in the country's northeast, where the Kurdish-dominated rebels are using adjoining Turkey to battle for control against the Islamic State.

Globe investigation: How an act of teenage rebellion sparked the war in Syria

Explainer: What we know so far about the evacuation of Aleppo

Read more: Syrian doctor: ''Damn the whole world which did not save the people of Aleppo'

We face a number of sobering lessons.

1. Islamic State was never the main problem. The territorial ambitions of the ultra-Islamist militia have ruined lives, imprisoned regions and showered terrorist outrages on Western cities. But the newly redrawn map of Syria makes the basic fact more clear: the presence in Syria of the group that calls itself Islamic State (also known as IS, ISIS or ISIL or Daesh) was purely a product of Mr. al-Assad's decision to resist a mass uprising against his rule. It only remains a threat as long as he continues his fight.

Islamic State will not fade away soon. It just used the chaos of the assault on Aleppo to retake the historic city of Palmyra. But Islamic State is a symptom, not the disease: Nine out of 10 deaths have been delivered by Mr. al-Assad's state forces. Islamic State appeared when he lost legitimacy, and will not disappear until he loses power.

2. Puppet states are back. Post-Aleppo Syria is a manufactured product of Russian and Iranian military and economic aid, period. Not since the Cold War has a satellite state combined a total lack of public legitimacy with total repression of its people in such a horrendous way. Let us not allow this to become a model.

3. The refugee camps will become permanent cities. Turkey's Gaziantep and Sanliurfa camps and the surrounding cities each contain around 300,000 Arabs and Kurds (of 2.5 million now living in Turkey) who have fled Mr. al-Assad's vengeance. Jordan's Zaatari and Azraq refugee camps contain more than 140,000 people. As long as the Assad regime remains in control, they cannot return; nor can the much smaller numbers of refugees who have fled to Europe and North America. It is time to start acknowledging these new cities, and populations, as long-term realities that could exist for a decade.

4. The Libyan option was preferable. The decision by the United States (and Canada) to avoid a full-scale military intervention in Syria in 2012 and 2013 was based largely on recent precedent: The long-term invasions and occupations of Iraq and Afghanistan were catastrophic failures, leaving little appetite for another. But why, after the gas-attack nightmare of 2013 crossed every red line, didn't we lend our military strength to unseat Mr. al-Assad? The answer, by then, was Libya: The same thing was done there in 2011, when NATO forces lent air support to the popular move to overthrow their own dictator – and now look at the place. A disaster.

But that's the less horrific option. Libya is an unstable mess verging on a civil war of its own. But it is not the site of the sort of enormous-scale monstrosities, involving hundreds of thousands of deaths, that it would have become if Moammar Gadhafi had been kept in power and permitted to mete his revenge.

We also have to remember, when contemplating U.S. President Barack Obama's fateful failure to take action (and Justin Trudeau's promise not to get involved), that the best possible outcome "getting tough" could have produced would have been something resembling current-day Libya. He would be under attack by media and Republicans for provoking this outcome, and Western militaries would be caught in an impossible position. But hundreds of thousands would likely still be alive. 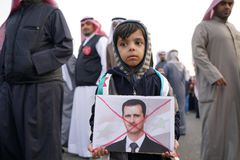 Opinion
The key to curbing the Aleppo slaughter lies with Russia - and Trump
December 14, 2016
Follow Doug Saunders on Twitter @dougsaunders
Report an error Editorial code of conduct
Due to technical reasons, we have temporarily removed commenting from our articles. We hope to have this fixed soon. Thank you for your patience. If you are looking to give feedback on our new site, please send it along to feedback@globeandmail.com. If you want to write a letter to the editor, please forward to letters@globeandmail.com.
Comments