The majority of Canadians are in a state of dread at the prospect of a Donald Trump presidential victory. They'll be even more despondent at the sight of opinion polls showing Mr. Trump got a bounce from the Republican convention and now leads Hillary Clinton.

They can, perhaps, take some solace in the fall of the titan who did so much to make Mr. Trump and his ilk possible. Roger Ailes, the mastermind of Fox News, the impresario who lowered the level of the public discourse like none other, the kingmaker who gave free rein to the Tea Party, to Glenn Beck, to the pharaohism of Mr. Trump, is out the door.

He's gone on the heels of sexual harassment allegations triggered by a former Fox show host, Gretchen Carlson. The beauty, you might say, killed the beast.

The influence of Mr. Ailes (rhymes with whales) extends far back. In the 1988 presidential election, he took negative advertising to new depths with his work on the infamous Willie Horton murderers-on-furloughs revolving door commercial. In the teargas year of 1968, he helped steer Richard Nixon to victory. He ran circles around the liberal left back then. He's been doing it ever since.

He was as good at his craft as Alfred Hitchcock. Some writers have likened him to Dr. Frankenstein setting loose the Trump monster. When he went down last week, he was at the very pinnacle. His network was reaping bonanza profits and Mr. Trump was being nominated

to head the Republican or, as some might call it, the Fox News ticket.

Mr. Ailes could yet, if we believe rumours, resurface to orchestrate the Trump campaign. But nothing he can do now for Mr. Trump could match what he could do for him as network czar.

The Ailes formula – even Democrats such as strategist David Axelrod admit he was brilliant – was to run the TV network like a massive political operation catering to its base. Turn it into a bully pulpit. Give the viewers raw meat. Pander to prejudices. Ronald Reagan's conservatism, Barack Obama's liberalism preached to an overarching American community of values. Roger Ailes saw no such community.

Shortly before he took over Fox News, Mr. Ailes told journalist Jane Hall that "I see myself as a 'corner man,' the guy in the ring, coaching the boxer to throw his best punches." Ms. Hall, who subsequently did a media show for Fox News, wrote in The New York Times that while Mr. Ailes didn't invent political polarization, Fox News abetted and amplified it. His art, she said, was in having the network repeat the same thing – have we noticed this with Donald Trump? – over and over until it leaves an imprint. He gave oodles of air time to the birthers who questioned Mr. Obama's citizenship. He promoted relentlessly the fallacy that Obamacare was a government takeover.

Mr. Ailes went to work for Richard Nixon at the age of 28. Nixon hated TV, but Mr. Ailes taught him how to manipulate it to his advantage. Law and order became a big theme of that campaign as it was in the 1988 campaign that featured the Willie Horton ad that did much to undermine Democratic candidate Michael Dukakis. In this year's campaign, Mr. Trump is now going hard on law and order.

Before Mr. Ailes, U.S. networks (CBS, NBC, ABC) operated from a centrist perspective. They kept polemicists marginalized. He changed all that, moving them to the forefront.

What he was doing was popular with many Canadian conservatives. We recall Stephen Harper lunched with Mr. Ailes in New York and thereafter Sun TV was born. But its prime-time sermonizers couldn't catch on like the Sean Hannitys and Bill O'Reillys south of the border. This country's debate climate is calmer as a result.

With Mr. Ailes gone, some think the television news industry and the nation's political discourse will undergo a significant shift. We'll see. The Ailes formula, as negative as it was, won the most eyeballs. In a fight between ratings and the public interest, we know which side usually prevails.

Trump: France, others hit by terror may face more screening
May 16, 2018 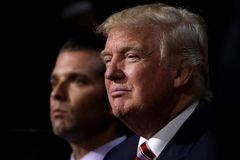