Almost lost in the tumult of the last few weeks – the collapse of the effort to repeal Obamacare, chaotic hirings and firings in the White House, cascading revelations over Russiagate, the escalating crisis with North Korea, and now the horror of white supremacists injuring and allegedly killing people in Charlottesville – was news that the Justice Department is going to start investigating universities for discriminating against white applicants, which is how this administration views affirmative-action programs.

Further proof, if any were needed, that Donald Trump is fomenting race-based conflict. The struggle to contain this President is not the struggle between progressives and conservatives, between the left and the right. It has become a struggle between those who wish to preserve the republic as a constitutional democracy and those who want to Make America White Again.

Even a year ago, it would have been inconceivable that hundreds of Nazis, white supremacists, Ku Klux Klanners and run-of-the-mill racists would feel free to congregate in the gracious Virginian city of Charlottesville, chanting "blood and soil" and other fascist profanities. That they felt free to do so is entirely the fault of this President.

"No condemnation at all," the Daily Stormer, a Nazi website, exulted afterward. "When asked to condemn he just walked out of the room. Really really good. God bless him."

The White House did issue a statement Sunday afternoon, though not under the President's name, saying that in condemning violence on all sides, "of course that includes white supremacists, KKK, neo-Nazi and all extremist groups."

Not all the people who support Donald Trump are Nazis, white supremacists or more mundane racists. Some genuinely believe that the institutions of the republic have become so corrupt that only a wholesale, populist cleansing will redeem the American promise.

But for whatever reason they support him, Mr. Trump's followers are enabling a President who stokes race hatred, who will not condemn Nazis and other fascists, whose words and deeds are leading white supremacists to kill on a street in New York, on a subway car in Portland and now during a melee in Charlottesville.

We can empathize with people cast adrift by the economic storms of globalization and the digital revolution; we can understand, though never condone, their resentment over the fact that a minority of children born in the United States today are white, that the evolution of the American myth embraces a racial and sexual diversity that they can't comprehend.

But empathy has limits. The fascists are mobilizing in Donald Trump's name. They may be few in number, but a larger, still-silent minority may come to approve their message, if not their methods or regalia. Unless this President's malignant poisoning of the body politic is contained, there will be more riots, more confrontations, more deaths. Unless he is contained, future historians may see Charlottesville as an overture to something even uglier and deeper and more dangerous.

Donald Trump exhausts us. He tries to tear down the social safety net. He seeks to wreck the global trading system. He attacks a free press. He threatens war against other weak, dangerous men. And he does it all at once, day after day. His assaults on democracy and civility are so multifaceted – and his term has barely begun! – that it's tempting to turn away, to hold your family tighter and just try to carry on.

But those who believe in democracy, in a free press, in racial harmony, in peace, have to fight back. What's so frustrating for Canadians is that there is little we can do on this side of the border, except watch in horror and pray.

Editor's note: An earlier version of this column incorrectly stated the name of the Ku Klux Klan. This version has been corrected. 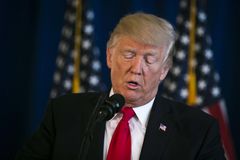 Trump’s talk of possible military action in Venezuela could bolster Maduro
August 13, 2017
Follow John Ibbitson on Twitter @JohnIbbitson
Report an error Editorial code of conduct
Due to technical reasons, we have temporarily removed commenting from our articles. We hope to have this fixed soon. Thank you for your patience. If you are looking to give feedback on our new site, please send it along to feedback@globeandmail.com. If you want to write a letter to the editor, please forward to letters@globeandmail.com.
Comments