Canadians without grey hair may be astonished to learn that, nearly 25 years ago, we actually fought an election over a big issue – one that seized national attention for months, conducted with passion and seriousness and, incredibly, with respect for voters' intelligence.

The battle over the Canada-U.S. free-trade agreement dominated Canadian media and politics for nearly two years, right up to election day, Nov. 21, 1988.

It was a battle royal replete with political irony. The inventor of the modern dream of a border-free North American economy was Donald S. Macdonald, Liberal finance minister, Bay Street giant and progressive liberal. His royal commission advocated "a leap of faith" on free trade. He gave former critic Brian Mulroney the political room to promote it, despite the Tories' history of opposition to "continentalism."

The Liberal Party was rhetorically opposed, although its business-connected leaders were sympathetic. The New Democrats were against the deal, as were labour academia, the arts community and the churches – at least in English Canada.

A business-led pro-deal coalition was a powerful advocate. The labour-led anti-deal alliance was heavily outgunned. The rhetoric was overblown on all sides, but the choice was real enough. It could be characterized as:

"Do you want to gamble your children's future that Americans [in 2012, read: Chinese] will continue to be our most important trading partner, given the rise of protectionism, the Asian tigers and a unified European community, without a better guarantee of access to jobs and investment? How naive!"

Or: "Do you really believe that, if we drop our cultural and economic protections as a small neighbour of the world's giant economy, American-owned plants here won't be shipped south, and that American companies will not run over every Canadian competitor in every town and industry within a decade? How naive!"

A quarter of a century after the deal was initialled on Oct. 3, 1987, it's clear that neither side's horror story would have played out as predicted. The overall benefits to Canada are manifest, although the initial costs for some sectors and some regions was heavy. The free-trade agreement did not suspend the laws of political gravity: American corporations still use their muscle to batter Canadian competitors when they have no alternative. The most frustrating and infamous example was the softwood lumber agreement, which took several governments and another two decades to resolve. But the dispute-settlement regimes have worked well, and not always in favour of the United States. Political and economic independence have not collapsed. Canada has, if anything, moved further apart from the U.S. on several metrics.

The campaign TV debates were key in framing the issues and the closing arguments. The NDP's Ed Broadbent struggled then, and during the campaign, to raise other issues and his status as the anti-free-trade champion. Despite excruciating back pain, the Liberals' John Turner exceeded expectations, flailing Brian Mulroney for "selling out Canada."

The Liberals seemed to be building late momentum. Allan Gregg, the Tories' brilliant young researcher, counterattacked, backed by the findings of his intensive riding polling. The Tories designed a "bomb the bridge" ad campaign – attacking the connection between Mr. Turner as "Captain Canada" and the anxieties that the anti-deal coalition had managed to plant with a majority of Canadians.

As a frustrated participant on the anti-side, I gnashed my teeth at the brilliance of the counterattack and its impact. Together with the business-led campaign, it delivered. Mr. Mulroney held on to his majority with 43 per cent of the vote and 169 seats.

This campaign snapshot is unfair to the evanescent firestorms and the riveting second-tier players and battles that made it a painful and career-ruining election for many. Some campaigns are epochal by their conduct, impact and the players. The great free-trade election ranks with the most important, up there with the early battles over Confederation itself, the conscription fights and the Pierre Trudeau victory of 1968.

The 1988 campaign was also marked by respect: for the intelligence of voters, for the integrity of one's opponents, for the importance of the process and the choice.

Most important, it demonstrated respect for the importance of civility in a democratic contest. Sure, there were angry taunts and insults on all sides. Yes, there were deeply passionate disagreements. But no one then would have dared to use disrespectful nonsense such as "family packs" to frame social policy or the thinly veiled racism of several recent provincial campaigns.

Perhaps most tellingly, when it was over, Ed Broadbent, John Turner and Brian Mulroney were more respected by Canadians, by partisan opponents and supporters alike, than has been the fate of any three leaders since.

Robin Sears, a former national director of the NDP, is a principal of the Earnscliffe Strategy Group. This was adapted from an article in Inside Policy Magazine, which will be presented at the Free Trade @ 25 Symposium on Oct. 3. 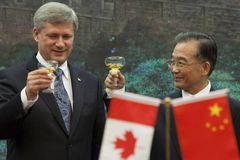 Opinion
Fishing for a trade deal in Asian waters
September 26, 2012