It's morning in Ottawa for all those muzzled federal scientists, demoralized diplomats and angry civil servants wearing "Harper Hates Me" buttons. The natural order of the national capital has been restored. A Liberal majority government is back in charge.

Stephen Harper's parting thank-you note to the bureaucrats – telling them in a Monday missive that he "will always be grateful for the support of Canada's world-class public service" – was promptly used by its recipients to line the bird cages of the capital.

The civil servants are already banking on retrieving the sick days the Conservative government had tried to take away from them; the scientists are savouring the prospect of being free to speak out, even if it's against government policy; the diplomats are yearning to show off a kinder, gentler foreign policy to a world that, Harper critics contend, has been wondering, "What happened to Canada?"

Among public servants, there is a natural preference for Liberal governance. It stems in part from previous long Liberal stints in power during which most of the senior bureaucracy moved up the ranks. In the tiny company town that is Ottawa, decades of intermarriage among bureaucrats, journalists, lobbyists and Parliament Hill staffers have left a gene pool that leans predominantly (L)iberal.

The Ottawa elites share a similar world view, one that squares with Prime Minister Justin Trudeau's promise of activist government. They also share a bias, acknowledged or not, in favour of a government-driven economy. A bigger state and more regulation enhances the prestige, power and bank accounts of this cozy cohort of Ottawa insiders.

Mr. Harper was not the first outsider to see this. As a candidate for the Progressive Conservative leadership in 1983, Brian Mulroney vowed to hand out "pink slips and running shoes" to a bureaucracy he considered to be infested with Liberal sympathizers. But in Ottawa, he found he needed to get the bureaucracy onside to get anything done.

Though he purged Liberal appointees at government agencies and Crown corporations, Mr. Mulroney trusted, and in turn succeeded in winning the trust of, most of the senior bureaucrats he inherited. His one high-profile ouster of a senior mandarin (Ed Clark, an architect of Pierre Trudeau's National Energy Program, who went on to become chief executive officer of TD Bank) was an exception to the rule.

Some top bureaucrats resisted a Tory agenda that included privatizing Petro-Canada and scrapping the NEP and the Foreign Investment Review Agency. But over all, Mr. Mulroney provided a policy-rich environment in which ambitious public servants could thrive. Most of his big economic, foreign and constitutional initiatives emerged from the bureaucracy, masterminded by such figures as Paul Tellier and Michael Sabia.

Mr. Harper never came close to embracing the Mulroney modus operandi. On the campaign trail in 2006, he took a swipe at the "Liberal civil service" and predicted it would be a check on a Conservative government for years. He never changed his tune. He was openly contemptuous of the policy consensuses of the bureaucracy and spurned its advice. He rubbed salt in the wound by stamping an offensively partisan imprint on all government communications.

But it is revisionist history to suggest Mr. Harper was the first to politicize the public service or muzzle scientists. The politicization of the bureaucracy began decades ago and reached its zenith with the Liberal sponsorship program, a bureaucracy-led initiative aimed at promoting national unity by rewarding Liberal-friendly advertising agencies.

Federal scientists remained free to publish peer-reviewed research under Mr. Harper, so the suggestion that they were muzzled or their science suppressed is an exaggeration. Besides, it was the courts, not the Harper government, that decided public servants do not have unlimited freedom of speech. Courts upheld the suspension and firing of scientists who spoke out against government policy under Jean Chrétien (one decried a 2001 government ban on Brazilian beef imports as "a political move") by determining that even scientists have a "duty of loyalty" to the government that employs them.

It is hard to imagine that a political team that controlled its messaging as scrupulously as Mr. Trudeau's campaign managers did will not seek to maintain that control in government. The real test won't be whether the Trudeau administration allows federal scientists who agree with its policies to speak publicly, but whether it offers a microphone to its critics in the bureaucracy.

No one outside Rideau Hall seemed too worried about that on Wednesday as Ottawa basked in the prodigal Liberal sun. 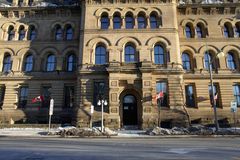