Stacey May Fowles is a Toronto-based writer.

There is no place in the world I would rather be than at the ballpark. Even with all the anxiety and uncertainty of the Blue Jays' do-or-die wild-card game against the well-matched Baltimore Orioles Tuesday night, there were moments where I relished how beautiful and relaxing a place it can be. Even when the game is at its most postseason stressful, the ballpark can be a buoying source of solace and comfort for so many. At its heart, baseball is an escape from the more terrible aspects of our day-to-day lives, a kind of secular church where we come together and faithfully connect over the triumphs and struggles of our team.

And yet, there are those who forget the fundamentally congenial, communal nature of baseball fandom. They think it's just about their experience, and disregard their fellow fans, and the generous spirit of the game.

They are the guys to my left in the 200-level who spent much of Tuesday evening spouting obscenities, homophobic slurs, and making "fat chick" jokes. They are the guys to my right who were happy to yell racist garbage at opposing players, and who repeatedly touched our section's usher without her consent. And they are whoever thought it was a good idea to disrupt a crucial seventh-inning play, during the most important game of the season so far, by tossing a beer can at Orioles outfielder Hyun Soo Kim.

"That was about as pathetic as it gets," Orioles' Adam Jones said of the ugly toss, and he's absolutely right. It was dangerous, and it was shameful, and it was embarrassing, and though it doesn't by any stretch of the imagination represent all Blue Jays fans, it's now what the baseball community sees when they look at us.

As someone who goes to the Rogers Centre on a regular basis, disrespect for the ballpark atmosphere, the players who populate its field, and the fans who cheer them on isn't a new phenomenon for me. But it always pains me to see it.

Loving this game, no matter which team you cheer for, means enduring occasional offensive fan behaviour, whether it's sexist, racist, or homophobic outbursts; aggressive or even violent conduct (during last year's postseason, a drunk fan, unprompted, shoved me and then called me a "bitch" when I protested); or generally contributing to a feeling of unease. The higher the baseball stakes, and the higher the ballpark attendance, the more we see this kind of drunken, hateful indifference to basic decency.

With all the joy and elation that was last night's victory, with all the strangers I high-fived and hugged, there were moments that felt unsafe. In a sea of nearly 50,000 fans, it takes so few bad apples to create that discomfort, and it takes so little on the part of those ne'er-do-wells to prevent it. Everyone is entitled to a basic feeling of well-being at the ballpark, and securing that means doing nothing: Keep your mouth shut when you feel the urge to yell something questionable, keep your hands to yourself, and keep your beer can firmly in your lap.

That beer can cascading into centre field is now one of the more visible examples of terrible Toronto fan misdeeds, spotlighted on the stage of Major League Baseball, and sure to sully the reputation of otherwise kind and good-natured Jays supporters. It only adds more fuel to the fire of us being "the worst fans in baseball"– we were already notable for tossing beer at a baby during last year's American League Division Series, and for being disrespectful at other teams' ballparks. I don't for a second believe that we are terrible en mass, but why give the baseball world any evidence to support that notion?

I have faith that a vast majority of Jays fans are more than happy to condemn Tuesday night's beer toss, and I believe there's an easy way to make known that condemnation. Always respect the people – on the field and off – who share your ballpark, and work to make it a place where everyone feels safe, welcome and comfortable.

Editor's Note: An earlier version of this column attributed a quote to Baltimore's outfielder Hyun Soo Kim. This version has been corrected to attribute the quote to Adam Jones 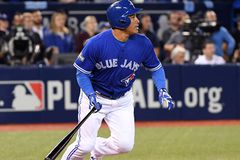 Kelly: The Toronto Blue Jays are the ‘who knows?’ team this postseason
October 2, 2016 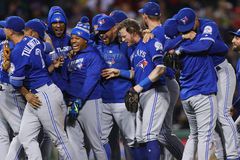 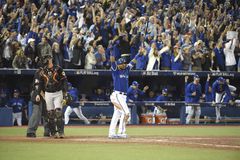