Greece's catastrophic debt problem isn't the only crisis to threaten the European order. It may not even be the worst. At least there is a deal, for now. But there is no deal, and no prospect of a deal, on what to do about the human tidal wave that is engulfing Europe from the south.

This summer the tiny, idyllic Greek island of Lesbos is being swamped with boats from Turkey, which lies just a few miles across the water. They overflow with people who come from Syria, Afghanistan, Pakistan, Somalia, Democratic Republic of the Congo, Eritrea. Some are upper middle-class mothers from Damascus with their kids, fleeing the Syrian civil war. Some are young African men, lured by northern Europe's streets of gold.

So far this year, more than 75,000 boat people have made their way to Greek islands. Last month, nearly 1,000 landed every day, according to the Greek coast guard. They huddle in squalid makeshift camps, but not for long. The Greek government has no money to feed and shelter them. Its main objective is to issue them papers and hustle them out of Greece as fast as possible. Then they'll be someone else's problem.

The moment these people set foot on Greek soil, or are rescued by the coast guard, they've won the lottery. They can't be deported unless they have applied for asylum and been rejected – and that can take years. Nor can they be returned to any place that is deemed unsafe. Because continental Europe has no internal border controls, they can go wherever they want. And if they don't report for their asylum hearing, the system can easily lose track of them.

The new arrivals are commonly referred to as refugees, although technically they are asylum seekers whose refugee status is yet to be determined. But to many Europeans, they're looking increasingly like invaders. Their sheer numbers could soon overwhelm society's compassion. Hungary – where xenophobia is rampant – is building fences to keep them out. Even Germany is starting to feel the strain. "The 400,000 asylum-seekers predicted to arrive this year will put Germany's new welcoming culture to the test," wrote Der Spiegel. "Can it endure? Can it survive?"

The Eurocratic vision is a unified asylum policy, in which each country will take its fair share of asylum seekers and refugees, and share the burden of resettlement and deportation of people who aren't entitled to stay. Many urgent meetings have been held. But no one can agree on the rules, responsibilities and procedures – to say nothing of the meaning of "fair share." In many countries, the idea of taking in more migrants is deeply unpopular. "It's not okay that Germany, Sweden and France are taking 50 per cent of the refugees while other countries do nothing," groused the German immigration commissioner.

Now some European leaders are adopting a hard line. British Prime Minister David Cameron is dispatching dogs and fencing to Calais, France, to stem the tide of migrants trying to breach the Channel Tunnel. Last week, Theresa May, Britain's home secretary, and her French counterpart, Bernard Cazeneuve, published a dramatic statement in the Telegraph about the "global migration crisis." They noted that many migrants have unrealistic expectations: "Our streets are not paved with gold," they wrote, arguing that "the long-term answer to this problem lies in reducing the number of migrants who are crossing into Europe from Africa."

But how to do that? The proposals are mostly vague, wishful and naive. Let's pressure repressive regimes to improve their human rights records, so that people wouldn't want to leave! Another proposal is to make it easier for people to apply for asylum from outside the continent, so that they will be able to enter legally and won't have pay traffickers to get there by boat. Good idea – except for the millions of potential economic migrants from Africa and beyond, who are determined to keep arriving, no matter what. Nor would it solve the problem of which refugees Europe should let in, or how many of them. There are nearly 60 million refugees worldwide. The Syrian crisis alone has displaced more than four million into the surrounding region. Taking in a few might salve Europe's conscience, but does nothing to address the bigger problem.

Another constituency of compassionate souls believes that because Europe is big and rich and needs immigrants, the answer is essentially to let them all in. Why should the French and British discriminate against the Nigerians and Afghans? This view is held by quite a few idealists and Church of England bishops, although not by the lumpenpublic, nor by politicians, some of whom are even rude enough to ask how European culture would survive a further onslaught of non-Europeans.

No one is discussing the Australian solution – yet. It is too harsh for European sensibilities. But it works. Australia's solution is to make sure that no migrants who arrive illegally by boat have any chance of being settled in Australia – even refugees.

Between 2007 and 2013, about 50,000 people arrived in Australia by sea, most of them trafficked by smuggling gangs. Most came from Afghanistan, Sri Lanka, Iraq and Myanmar. In response to the onslaught, the government dispatched military vessels to intercept the boats and tow them back to Indonesia. Asylum seekers were sent to detention camps in Nauru or Papua New Guinea for assessment. Those found not to be refugees are sent home or settled in a third country. Those found to be refugees are settled in Papua New Guinea. Australia has also reached a deal with Cambodia to send refugees there.

Refugee and human-rights groups were outraged. But Australians overwhelmingly approved. Both main parties support the policy. Since the clampdown began, the human tide has subsided to a trickle. In the past 18 months, more than 600 people have been intercepted at sea, and not a single boat made it to Australia. Meanwhile, Australia's intake of refugees who apply from abroad remains generous.

The Australian solution, or something like it, is the only one that stands a chance. That's because people want to wind up in Britain or Germany or Sweden, not Papua New Guinea. And right now they know that so long as they set foot on Lesbos or Lampedusa, Italy, they have a pretty good chance. But the chance that the European Union will come up with such an approach is close to zilch. And that means the outlook is not great: more dogs, more fences, more drownings on the perilous boat trips.

Hundreds of migrants brought to Italy after Mediterranean rescue
August 6, 2015 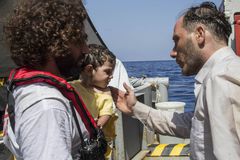 Opinion
The dark forces at work in the Jungle of Calais
August 5, 2015 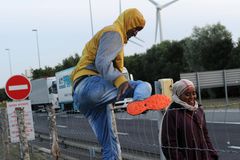