Nicholas Barrett is a British citizen living and working in Florence, Italy. He is an editor and writer, and recently received worldwide attention for his online comment on a Financial Times Brexit story

Living and working in Italy as a British citizen is sometimes so easy that I often forget I'm abroad. As a citizen of the European Union, I enjoy the right to live and work here. If I get sick, I have a card that guarantees me treatment. All this holds true for my Italian friends living and working in London. We are sometimes referred to as the "Erasmus generation" – a new term derived from an EU program allowing students to spend a year studying in a city on the other side of the continent. We never really celebrated any of this because it always seemed so obvious and mutually beneficial. Now, those of us with a connection to Britain are paying the price for our casual complacency. Amid all the wine and soccer, we forgot that we were a minority.

The majority of Europeans were always happy to live in one place. The only time they read about the European Union was when tabloid newspapers complained about its swollen bureaucracy. As soon as the free movement of people came to be seen as an uncontrollable exodus of refugees and the hypothetical terrorists that travelled among them, as it did last year, the whole project was in trouble. These anxieties are part of the reason the European Union lost custody of millions of British young people this week. Like children in the middle of a bitter divorce hearing, we were cut off from our preferred future without having much say in the matter.

Yes, there was a huge, democratically legitimate referendum, and everybody had the chance to have their say. And yet, a closer look at the numbers reveals a somewhat skewed mandate for the newly restricted future of young people in Britain. According to a YouGov poll, 75 per cent of voters under the age of 25 voted for Britain to remain in the European Union. With the average life expectancy of these millennials anticipated to reach 90, it means that the vast majority of the youngest generation of British voters will likely have to spend seven decades locked out of the union they voted to be inside. In one evening, we lost the freedom to work in 27 wonderful European countries.

Meanwhile, millions of young people from all over Europe will be locked out of London, which has effectively been the holy land for every ambitious millennial on the continent. We'll never know the full extent of the jobs, the opportunities, the businesses, the investment, the friendships, the artistic and scientific collaborations, the marriages and the families that have been cancelled before they even had the chance to exist. All over Europe, ambitions will be flickering out, and we do not know whether they will ever re-emerge. And who did this to us? It was the grown-ups.

Yes, it was our parents, our grandparents, our aunts and uncles, and the neighbours we never talk to. More specifically, from a demographic perspective, it was white, working- and middle-class baby boomers who didn't go to university and found themselves left behind by globalization and mass mobility. It's the same demographic powering the engine of the Trump campaign in the United States.

The Britain that has emerged from the Brexit referendum is one fraught with divisions and recrimination. Culturally, the perception is one of an urban archipelago under siege in a silent war against its own rural and suburban malcontents. 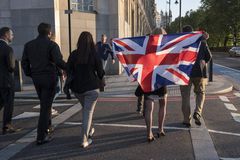