I know from experience that this was the softest of targets. The Mandalay Bay hotel complex, across the road from the Las Vegas airport and on the opposite end of town from the old neon-lit gambling strip, is largely a family place, a comparatively non-garish retreat for visitors seeking a nice hotel room for the weekend, a Broadway musical and some live entertainment.

It's where I stayed shortly after the Sept. 11, 2001, attacks, when I was reporting on al-Qaeda plots launched from Las Vegas. It is where, a few months after those attacks, I found myself crushed in the midst of a capacity crowd at a sold-out concert, momentarily frozen by a paranoid thought that often struck me in busy public places during those months: "This would be a good target for an attack."

So I had an especially vivid sense of the very specific form of terror and agony experienced on Sunday night when the families gathered outside the Mandalay Bay complex eventually did prove to be a target for a man with a rifle. It was the 273rd mass shooting (that is, with four or more victims) to have taken place in the United States so far this year. It was the deadliest in the modern history of the United States, the latest and largest in a string of firearms horrors meted out on previously happy crowds.

There will be a debate about whether this was terrorism. Let me point out that the entire argument about motives and beliefs is absurd and purposeless.

A mass shooting aimed at an innocent crowd is intended to create terror. Such attacks are committed by individuals who hold a strong desire to wreak such terror, to commit an act of violence for its own sake. Sometimes such individuals join, or identify themselves with, violent organizations whose messages provide a self-justification for those violent urges. Sometimes they don't.

There is little difference: When it comes to predicting, intercepting or denouncing mass killings, it makes no difference whether violent-minded people attach themselves to a pre-existing ideology or simply act out their own pathologies.

It is true that some near-identical mass killings get labelled terrorism and some don't, and that this label often has more to do with the perpetrator's skin colour than anything else. This year's Charlottesville, Va., and Quebec City killings, both allegedly carried out by white guys guided by hateful ideologies coming from organized movements, have not always been labelled terrorism by political leaders. Acts carried out by darker-skinned guys who have no connection at all to any organization or ideology, such as the car-and-knife attack on London's Westminster Bridge in March, instantly get labelled with the T word.

In keeping with this pattern, U.S. President Donald Trump described the rifle slaughter committed in Las Vegas by 64-year-old Stephen Paddock as a "terrible shooting," as a brutal murder, as "pure evil," but declined to use a word he has glibly applied to similar events committed by non-white people.

It might turn out that Mr. Paddock, as an Islamic State propaganda channel claimed on Monday, had become an adherent of the terrorist group's ideas and possibly a convert to Islam later in life. Or it may be that the FBI is correct in saying that this is nonsense, that Mr. Paddock never had any affiliation with terrorist ideologies.

This makes little difference. Intelligence organizations and counterterrorism scholars have spent the past 20 years analyzing the backgrounds and influences affecting hundreds of people who have committed terrorism in the West or joined extremist movements, and they have found only one consistent pattern among them: They are people who have a propensity to commit violent acts. Ethnicity, religiosity, immigration status, income and residency have no value in predicting whether someone will become a terrorist; the only predictor is a tendency to violent impulses.

It has become fashionable in some counterterrorism circles recently to claim that we need to study and understand the specific ideology and theology of terrorist groups – that one cannot understand or combat the actions of Islamic State or al-Qaeda or al-Shabaab without fully understanding their scripturally tinted self-mythologies, without having learned their favourite Koranic verses. Terrorism, in this view, is the product of specific ideas and beliefs.

This is demonstrably wrong. On one hand, the specific ideologies of violent organizations have never been useful aids to understanding their actions. Repeated readings of Mein Kampf would not have helped anyone stop Hitler, much as the favourite Koranic verses of Islamic State founder Abu Bakr al-Baghdadi offer no insight into the group's strategies, actions or attacks – and even less into the actions of violent-minded Westerners who act in his group's name.

That is because those people who align themselves with such organizations, whether as soldiers on the ground or as "lone wolf" terrorists acting in their name abroad, never start with the ideas. No peaceful-minded individual has ever read the literature of an extremist group and then, through a process of rational thought and calculation, decided it is a wise choice to become someone who would slaughter a crowd of strangers.

The terrorist mass killer and the non-terrorist lone-actor mass killer are the same person. The psychology that encourages an individual to take up weapons against strangers is a singular thing. The result, whatever we call it, is always terror. 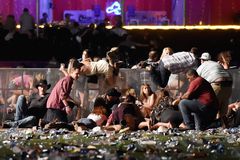