From Crimea to Flanders, secessionist movements are breaking out all over. Some lay claim to more legitimacy than others. But they are all testimonies to the enduring grip of historical narratives in which defeats are mythologized and perceived wrongs must be righted.

The West's refusal to recognize the results of a Crimean referendum, much less a declaration of independence, is undermined by the messiness with which Ukraine's president was shooed from office and the U.S.-Russia rivalry driving this geopolitical crisis. But it is a good illustration of how any one people's claim to independence is often in the eye of the beholder.

Why else would most Westerners look at Scotland, Catalonia and Quebec and wonder why the heck so many of their citizens want to break away from their respective countries? The Scots, Catalans and Québécois enjoy enviable standards of living, democratic freedoms and stability.

But in Scotland and Catalonia (where referendums are to be held this year) and Quebec (where one could be in the cards if the Parti Québécois wins a majority government on April 7), the dream of nationhood is embedded in the DNA. Like a genetic mutation, it may long lie dormant. But under the right conditions, it can be felt.

In the context of 2014, three historical dates loom large.

The first is 1707, when the Acts of Union joined Scotland and England into a single state. It has hardly mattered that this "hostile merger," as historian Simon Schama has called it, strengthened an empire. It has inspired demands for more Scottish autonomy ever since.

The second date is 1714, which marked the fall of Barcelona and the unification of Spain under the Bourbon King Philip V. Catalans loyal to the Hapsburg dynasty lost the War of the Spanish Succession, but continue to mark the defeat with massive marches each September.

Canadians, meanwhile, should need no lesson on the significance of 1759. But if many in English Canada see the fall of Quebec City and then New France as a milestone toward nationhood, Québécois still call it the Conquest. To say they should just get over it is as ignorant as it is futile. It's in the DNA, remember.

History aside, however, the Scots and Catalans can only dream about attaining the degree of autonomy Quebeckers already have. Canada is a federal state, with provinces holding exclusive powers granted in the Constitution. Our federalism is also asymmetrical, with Quebec enjoying additional powers, for instance, over language, immigration and job training. In the cases of Scotland and Catalonia, most of the powers the central government has devolved, including legislative ones, it can also repatriate.

In Britain, David Cameron's Conservative government (which remains deeply unpopular in Scotland) is employing a tough-love approach in its attempt to defeat the nationalists in September's independence referendum. It has warned that an independent Scotland would be prevented from sharing the British pound and underscored the difficulty the new country would face in joining the European Union, since other EU countries (hello, Spain) oppose its membership.

On Wednesday, Parti Québécois Premier Pauline Marois tried to pre-emptively undercut a potentially similar argument by Stephen Harper – another Conservative Prime Minister highly unpopular in a secessionist region – by insisting that an independent Quebec would use the Canadian dollar and influence monetary policy. But, as in Scotland, neither side can say with certainty what would happen.

To avoid having to answer the question, some No proponents, including former Labour prime minister Gordon Brown, say Britain should promise Scotland more powers to undercut the Yes forces. Polls show that barely a third of Scots favour outright independence, but more than half favour full fiscal autonomy (known as maximum devolution, or devo max). Mr. Cameron seems to see no need to go that far.

Granting Scotland and Catalonia more control over the taxes raised on their territories would likely go a long way toward placating the nationalists. But Mr. Cameron is unwilling to give up control over North Sea oil revenues, while Spain would be forced to slash fiscal transfers to its poorest regions without Catalonia's large net contribution to central coffers.

Besides, conservative Spanish Prime Minister Mariano Rajoy denies that Catalonia even has a right to hold its referendum, which is scheduled for November. No sooner had media baron Pierre Karl Péladeau joined the PQ cause than he called Mr. Rajoy's position "unacceptable."

Mr. Péladeau knows his history, and his numbers. Unlike Catalonia, Quebec is a net beneficiary of fiscal transfers from the central government. But if anyone could massage history and economics to get Quebeckers to vote Yes, it just might be the perspicacious PKP. 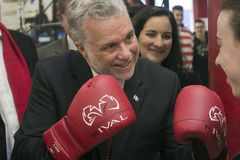