Richard Florida is director of the Martin Prosperity Institute at the University of Toronto's Rotman School of Management, and senior editor at The Atlantic, where he co-founded CityLab.

Taking the podium after winning Toronto's recent mayoral election, John Tory acknowledged the challenges that face our city and how he planned to tackle them.  "Torontonians want to see an end to the division that has paralyzed city hall in the last few years," he said. "Tonight we begin the work of building One Toronto."

His inclusive tone is a welcome change of tack after the corrosive behavior and attitudes that marked the Rob Ford era. Tory takes the reins of a city deeply divided. But these divides transcend the old city-suburb split which has defined Toronto and most major metros since the 1960s. That old divide was clear in first election of the mega-city in 1998 where the urban old city of Toronto was pitted against the surrounding suburbs, with the urban centre going all in for Barbara Hall and the suburbs throwing in for Mel Lastman.

These simple battle lines no longer tell the full story of the problems that Toronto, or any of Canada's three largest metros, face.  Last week's election obliterated the old suburbs vs. city framework. Instead we saw the vote break along economic lines with Tory taking the relatively prosperous city centre and into the suburbs along the transit lines. Ford dominated the outlying working and service class areas, away from transit.  Chow carried the young, affluent downtown core.

Increasingly the divisions in Toronto cut across the city and suburbs, with the real divide being along lines of economic and social class.

And not just Toronto, the same kind of class divisions can be seen in Canada's next two largest metro areas: Vancouver and Montreal.

The maps below are from a new study,  The Divided City, that I conducted with my Martin Prosperity Institute team, to track the stark new urban geography of class. They chart where the three main classes of workers live in each city: The affluent professionals and knowledge workers who make up the "creative class" (people who work in technology, science, media, business, medicine, the arts, and education); the much lower-paid and faster-growing "service class" (people in retail sales, routine administration, food preparation, and personal care); and the dwindling blue collar "working class" (people who work in manufacturing, construction, and transportation).  Predominately creative class areas are shaded in purple, service class areas beige, and working class neighborhoods blue (data are from Statistics Canada). 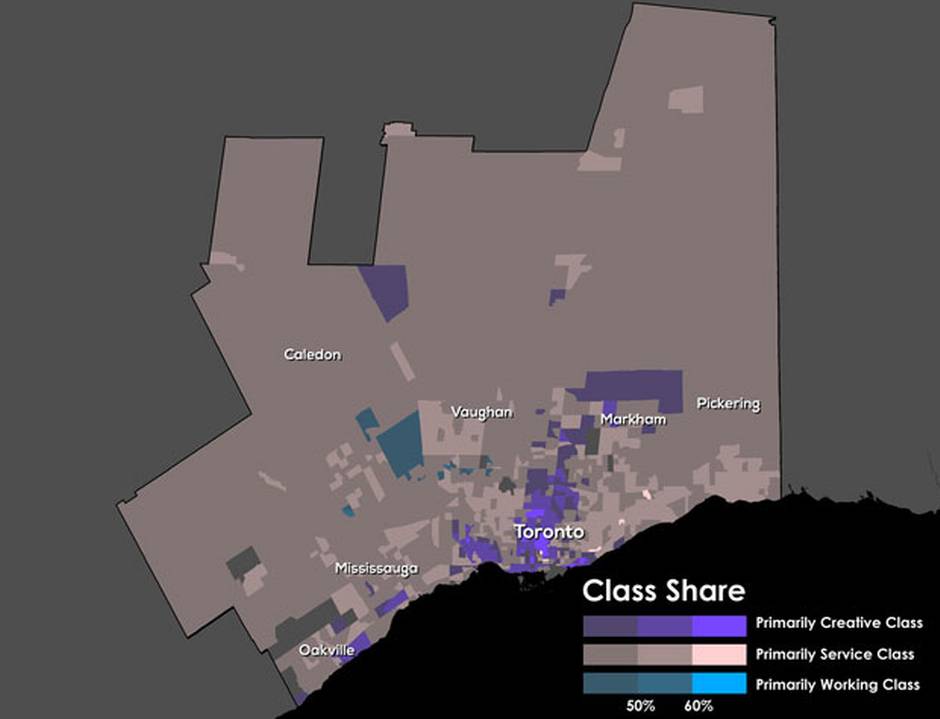 The affluent creative class, which makes up about a third of the metro’s work force, radiates out from the downtown core and into the suburbs along the transit lines and also across the lake shore. The poorly paid service class, more than 45 per cent of the work force (and which includes many more new Canadians and visible minorities), is concentrated in traditionally disadvantaged urban enclaves as well as being pushed further out in the suburbs and exurbs away from transit. Troublingly, Toronto’s once proud industrial heritage and blue-collar working class has almost completely disappeared as the city and region have deindustrialized. There are only a few blue working class tracts in the entire metro area.

Next, look at Vancouver: 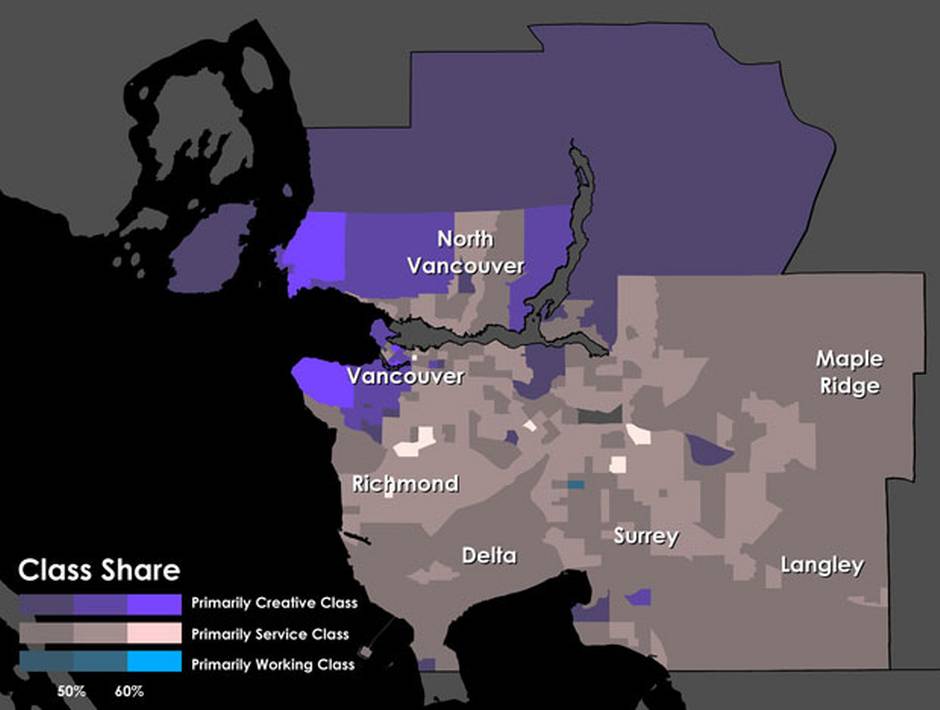 Vancouver is even more severely class-divided than Toronto. Its affluent knowledge workers, professionals, and creatives are clustered in and around its core and form a huge, self-contained wedge to the west and the north around natural amenities like parks and mountains. Its service class is pushed to the more disadvantaged and less well-served areas of the south and east. Again there is just one small working class neighborhood that remains.

And, here is Montreal: 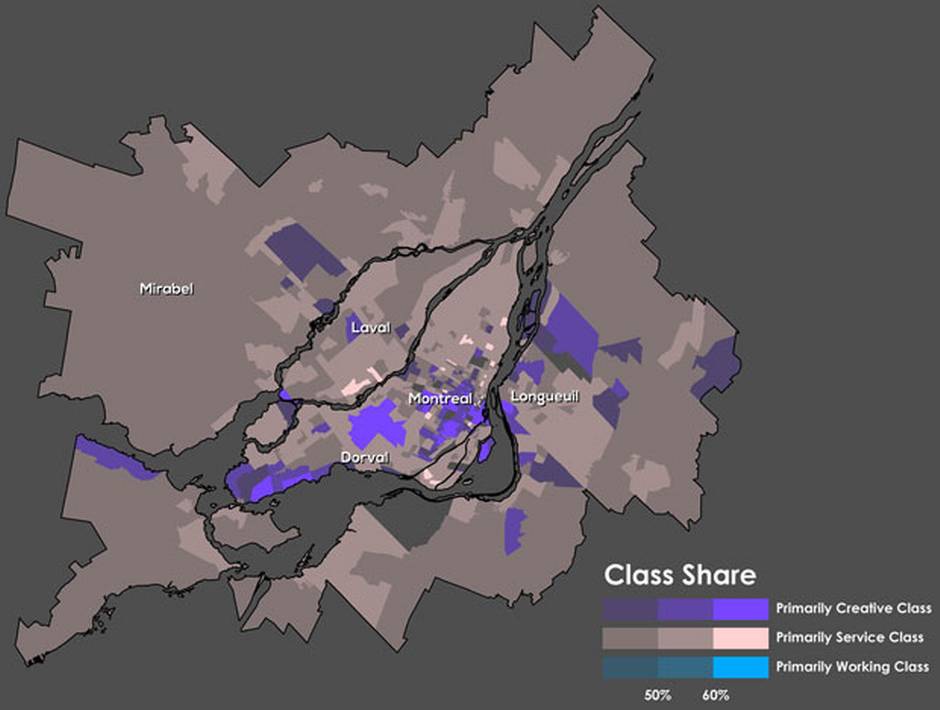 Once again, the advantaged professionals, knowledge workers and creative class are clustered around the urban core, especially on and around Mont-Royal, home to the Université de Montréal. There are also several clusters to the west of the city in the Westmount and Notre-Dame-De-Grâce communities, which are well served by transit and where Concordia University is located. Montreal’s largest concentration of the service class is far out in the suburban fringe, especially in the transit-poor former industrial communities of Montreal-Est, Pointe-aux-Trembles, Anjou and Montreal-Nord. Not a single predominantly working class neighborhood remains in the metro.

An interactive map allows you to zoom in on each of the three cities and pinpoint these class divides neighborhood-by-neighborhood.

Taken together, these maps present a troubling picture of a new kind of class divide and socioeconomic segregation. Across each of Canada’s largest cities and metros, the affluent and educated have colonized the most central, economically functional, well-served locations, in downtowns, but also out into the suburbs along transit routes, near universities and other knowledge institutions, and close to waterfronts and other natural amenities. Most of all, they want to – and do - cluster and concentrate around one another gaining additional economic leverage.

As housing costs in these highly desirable urban and suburban locations are driven up, the options of the service and working classes are limited to what’s left over. The large and growing service class is shunted into the most disadvantaged and least desirable areas of the central city and into the far-off peripheries of the most economically distressed and disconnected suburbs. As a result, the people who need transit the most are pushed the farthest away from it and from economic opportunity, and must endure the longest and most arduous commutes. Canada’s service class is even more geographically concentrated and isolated than it is in the United States. And it is striking and troubling how few blue-collar neighborhoods remain in Toronto’s major metro area.

The shape of this new divided city and metropolis is different — and more complex — than the old urban-suburban divides of the past. The new class geography does not conform to the old “hole in the donut” model of affluent suburbs surrounding poor cities. Nor does it follow the more recent idea of a “great inversion," in which the rich flow back to the city and the poor are displaced into the suburbs. What we are seeing is rather a patchwork of concentrated advantage and concentrated disadvantage that cuts across center cities and suburbs alike.

These new class divides are cause for deep concern. Canada’s once thriving middle-class neighborhoods are being hollowed out. Instead we are seeing enclaves of advantage juxtaposed against a growing sea of socio-economic disadvantage.

Tory’s victory signals a new and better day for Toronto. But the city’s underlying socio-economic fault lines remain. If left unaddressed, they will continue to deepen, with future backlash lurking somewhere down the road. Rob Ford cautioned as much on election night: “If you know anything about the Ford family, we never, ever, ever give up," he told supporters at his victory party."In four more years, you're going to see another example of the Ford family never ever giving up." Who knows when this backlash will rear its head in Canada’s other large cities?

Worse, the growing geographic separation of the classes threatens the very essence of the Canadian Dream. The intersection of class and geography shapes everything from where we go to school and how we vote to our opportunities for upward mobility.

Just as our cities and urban centers are reviving, their growing class divisions threaten their further development in new and even more vexing ways.