David Johnston's selection as Governor-General may be the first time the post went to someone after what can be seen as an audition. I mean his role in setting the terms of a public inquiry into the Mulroney-Schreiber affair.

I know he has a fine résumé: law dean, university president, publications, public service gigs, business boards, a bit of media exposure, some Harvard and hockey in his past. There are loads of achievers in this country with that kind of CV. But most didn't play a key part in a recent crisis that was politically charged for the government.

Consider: The Harper government came to power not from any surge in popular appeal, but due to mass revulsion against the Liberals over the Quebec sponsorship scandal as shown by the Gomery inquiry. That, plus a unique RCMP intervention in the middle of an election, reinforcing the image of Liberal corruption. Even with all that working for it, the Harper team has never managed a majority, or even majority territory, in its polling. The last thing it wants is any suggestion that a previous Conservative government was similarly tarred. But it's what lurked in the Mulroney-Schreiber nexus.

In 1997, former prime minister Brian Mulroney received $2.1-million from the federal government over a case in which he'd been mentioned in leaked RCMP documents as a suspect in a corruption matter. He denied under oath having much to do with a bagman and scamp named Karlheinz Schreiber. But it later emerged that he'd taken large amounts of cash from him that he kept secret. Under the pressures of minority government, more details surfaced until Prime Minister Stephen Harper reluctantly agreed to a public inquiry. But, crucially, he called on David Johnston to define its limits.

He set them narrowly, excluding any examination of the role of Airbus, a huge European company Karlheinz Schreiber acted for, and which got a $1.8-billion order from Air Canada while it was still a public firm in the Mulroney years. Airbus gave Karlheinz Schreiber more than $20-million of the Canadian funds it received to distribute as he saw fit among people who had made the deal happen. The real question for the inquiry was: What did Brian Mulroney get the cash for, and was it connected to Airbus? The inquiry was prevented from asking because, said David Johnston, that was "well-tilled ground." But it wasn't really. The RCMP hadn't been able to make Airbus officials testify, for instance; an inquiry could. And when striking new evidence emerged from a Mulroney crony at the inquiry, it wasn't pursued due to the narrow terms.

In his final report, the commissioner seemed to express frustration but said he was unwilling to speculate. He concluded what everyone already knew: Brian shouldn't have taken the money or misled people about his relationship with Karlheinz. Ka-ching - $14-million more of your money spent.

This wouldn't matter much if the G-G's role was largely ceremonial, as it has usually been. But we live in minority government times, which may turn permanent. When G-G Michaëlle Jean delayed a response to Stephen Harper's prorogation request, he seemed displeased and she wasn't reappointed.

All I'm saying is, if you view the inquiry gig as a test of what the guy might do in a situation where Harper interests are at stake, you'd be reassured. Alternately, if he'd set terms that worked against what were seen as Harper interests, do you think he'd have become G-G? I'm not politicizing this; the appointment itself does so. Especially for a leader who, as his mentor Tom Flanagan says, "thinks about these things all the time."

Maybe, instead of getting rid of the monarchy, as many people argue, we should can the post of G-G and let the Queen herself handle future political crises. She seemed to do pretty well here, when the heat was on.

Opinion
The new G-G represents the very best of what Canada is
July 9, 2010 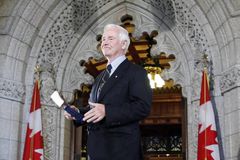 Thanks to Dr. Johnston, Airbus became Airbust
July 9, 2010
Opinion
The cosmogony of the Gulf spill
July 2, 2010
Follow us on Twitter @globedebate Opens in a new window
Report an error Editorial code of conduct
Due to technical reasons, we have temporarily removed commenting from our articles. We hope to have this fixed soon. Thank you for your patience. If you are looking to give feedback on our new site, please send it along to feedback@globeandmail.com. If you want to write a letter to the editor, please forward to letters@globeandmail.com.
Comments are closed