In a variation of the YouTube phenomenon known as "cats vs. cucumbers," we are now witnessing "French mayors vs. burkinis," with daily apoplectic reactions to full-body swimsuits worn by some Muslim women. So far, 15 French municipalities have banned the outfit. As French Prime Minister Manuel Valls put it: "The burkini is not a new range of swimwear, a fashion. It is the expression of a political project, a countersociety, based notably on the enslavement of women."

Just to make sure that women are not enslaved, armed "burkini" police forced a Muslim woman to remove part of her clothing on a beach in Nice and issued a ticket that cited her for not wearing "an outfit respecting good morals and secularism." This is reminiscent of Saudi police who issue citations (and worse) to women who don't dress respecting "good morals." Ah, the irony: Liberate a group of women from an ideological dress code by telling them what they cannot wear.

Yes, France is on edge following the horrific attack in Nice in which 86 people were killed, including 35 Muslims. Yet, this reaction to the burkini seems over the top and may further alienate the country's Muslim population. It also feeds into the narrative put out by Islamist extremists to Muslims in the West: There is no middle ground, the West rejects you completely and wants to strip you completely of your Muslim identity.

Laïcité, the principle of secularity that is deemed untouchable by the French, is seen increasingly as a cover to attack only one religion: Islam. Furthermore, the only other group that hates the burkini as much as French mayors are the very extremists that France is at war with: They believe women should be secluded and that public beaches are dens of sin. They view the burkini as a hypocritical tool to meld Islamic and Western values. For them, the burkini is a sellout.

In Australia, the designer of the original burkini, Aheda Zanetti, reports a sales increase of nearly 200 per cent since the French controversy began. She has also received messages of support from women worldwide. What is interesting is that roughly half of her customers are non-Muslims, including skin-cancer survivors and those with skin sensitive to the sun. And while the term "burkini" is a combination of burka (a tent-like cloth that covers the entire body, face and hands) and bikini, it resembles neither. Think of a wet suit – with a tunic.

It was inevitable for a burkini brouhaha to surface in Quebec. Coalition Avenir Québec MNA Nathalie Roy called for banning the burkini, which she said "has no place in Quebec, no place in Canada." Saner voices have prevailed. Many Quebec politicians have dismissed this as a non-issue and have no desire to reignite the divisive rhetoric that emerged in the 2013 debate about the province's proposed Charter of Values. As many point out, the Charter of Rights and Freedoms guarantees a woman the right to wear a burkini.

While the Charter provides a legal blueprint for establishing rights, Canadians themselves play a decisive role in building social cohesion. Do we want a society based on mutual respect and inclusion? Or one in which some groups have less rights than others?

I bought my first burkini when my daughter was about a year old, so that I could be in the pool with her during swimming lessons or for a fun day at the local beach. I have gone swimming in my burkini in the Bahamas and the Red Sea, and at resorts in Mont-Tremblant, Que., and Huntington Beach, Calif. (where, by the way, the surfing suits were not that different from my burkini). I've even worn it on trips to Canada's Wonderland with the kids, and to water parks. I love it for many reasons, mainly because I can participate comfortably in water-based activities.

The burkini is not a political project, but will become one if it is banned. As for enslavement, the last time I checked, feminism was about empowering women to make choices for themselves – free of coercion from the state. Burkini-clad women aren't enslaved or political projects – they're just women who are retaining their modesty while having fun by the pool or at the beach. 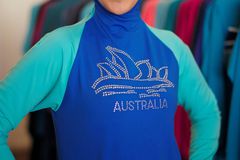 Opinion
With burkini bans, France buries its head in the sand
August 22, 2016 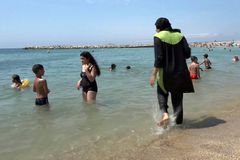