Canada's millennials have a crush on Justin Trudeau, and the feeling is mutual. The Prime Minister's values align with their values. He embodies all their hopes and dreams – for the environment, for social justice, for gender and racial diversity and equality. He has shaken off the tyranny of the boomers and embraced everything that is young and fresh. He even appointed himself Youth Minister. What more could they want?

Mr. Trudeau's central pledge is to "grow the economy." He promises that we can achieve all these wonderful things and expand the economy, too. He will create jobs. He will boost productivity. He will help the millennials crawl out of their parents' basements and achieve the same prosperity they've enjoyed.

And now, he has a master plan – a bold new plan to kick Canada into high gear by pouring billions into infrastructure, making us a magnet for foreign investment and massively increasing immigration. It is super ambitious. It has been devised by the best and brightest minds there are, including the global head of the world's most renowned consulting firm (a Canadian, no less!). What could possibly go wrong?

What could go wrong is a massive mismatch of expectations to results. The risk of a failure to deliver is high. And the prospects for delivering what millennials want most – affordable housing anywhere in the vicinity of Vancouver and Toronto, more good jobs with higher take-home pay and benefits – are low.

Mr. Trudeau makes the economy sound like a neglected garden that just needs more water, fertilizer, and a good weeding to perk it up. But the truth is that no one knows how to kick-start the economy. No two experts can agree on what might work.

In the past few years, economies around the world have stalled. That stagnation is a major factor in the political unrest that is rocking Europe and the United States. In Canada, we dream of a return to the good old days, when the GDP grew by 3.5 per cent a year. But it's entirely possible the good old days aren't coming back. The Bank of Canada keeps ratcheting its forecasts down: It now says growth will be 1.1 per cent this year, and 2 per cent in 2017. Over time, that small difference between then and now becomes huge. At a 3.5-per-cent growth rate, wealth doubles every 20 years. At 2 per cent, it takes 35 years.

Sadly, a lot of government policies are going to make things worse, not better, for millennials. And a lot of parents should renovate the basement for the kids, because they're going to need it.

Start with sky-high real estate prices, which have set off alarm bells at the Bank of Canada and the government housing agency, the CMHC. The problem is an acute shortage of supply in the Vancouver and Toronto regions. The cause of the supply shortage is not foreign buyers – that's a red herring – but rather provincial government policies that sharply restrict development with their "smart growth" plans. The best way to increase supply is to ease restrictive regulations and let developers build more houses. But that's not going to happen, and the federal government isn't going to help. Some of the smart-growth people who strangled the housing markets now work for the Trudeau government.

Mr. Trudeau has also made sure the millennials will keep forking over money they don't have to line the pockets of the well-off old. He reversed the previous government's modest changes to Old Age Security, a tidy benefit that goes to most seniors, whether they need it or not. It seems a bit unfair to make Starbucks baristas foot the bill for topping up the bank accounts of people with $100,000 incomes, just because they're over 65. But that's what we do. The "reforms" to the Canada Pension Plan are no gift to millennials, either. According to the government's own finance experts, as CBC News revealed, the extra cost of CPP contributions will drive up wage costs and reduce employment, as well as take-home pay, for many years to come.

What millennials need most of all is deep structural reforms to our retirement system. The steeply rising costs of health care and benefits for retired boomers will be a huge drag on the economy. The solutions are obvious: encourage people to prolong their working lives, gradually increase the eligibility age for retirement benefits (an age that was set at a time when most men died before they reached 65), and introduce more means testing for benefits – including health care – that now flow to the affluent.

But that would take real guts and heavy lifting. The millennials' love affair with Mr. Trudeau will wane if their prospects don't improve. And so far he's not interested in a fix for what really ails them.

Young people are right to be angry about Morneau's acceptance of 'job churn'
October 27, 2016
Justin Trudeau greeted by heckles and jeers at youth labour forum
October 25, 2016 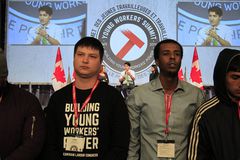 Forget the yard, first-time buyers told to think condo, rentals
Subscriber content
October 26, 2016
Follow us on Twitter @globedebate Opens in a new window
Report an error Editorial code of conduct
Due to technical reasons, we have temporarily removed commenting from our articles. We hope to have this fixed soon. Thank you for your patience. If you are looking to give feedback on our new site, please send it along to feedback@globeandmail.com. If you want to write a letter to the editor, please forward to letters@globeandmail.com.
Comments