In 1991, the Manitoba Aboriginal Justice Inquiry recommended that preliminary inquiries be eliminated and replaced with an out-of-court discovery process. It noted that having Provincial Court judges preside over preliminary inquiries was "an inappropriate and wasteful use of their time and talents."

In 2012, the federal, provincial, and territorial Ministers responsible for Justice and Public Safety discussed the need for preliminary inquiries given that the Crown must provide full disclosure to the defence and more effective Crown screening practices.

In 2016, the Supreme Court of Canada ruled in R. v. Jordan that,"Parliament may wish to consider the value of preliminary inquiries in light of expanded disclosure obligations." This decision also created strict time frames for determining when charges should be dropped due to unreasonable delay.

On December 21, 2016, I along with the Chief Justices and Chief Judge of the three levels of court put forward a draft Manitoba proposal to the Federal Minister of Justice requesting her to consider a four-year pilot project which replaces preliminary inquiries with an out-of-court discovery process for offences punishable by 10 years or more.

The Canadian Bar Association responded on March 14 by urging the Federal Minister of Justice to reject the Manitoba proposal and retain preliminary inquiries. I hold a much different view.

The Manitoba proposal reflects the evolution of preliminary inquiry reform in Canada. If implemented, it will ensure timely justice while still maintaining a pretrial discovery process for the most serious offences.

Since the Supreme Court ruled in 1991, in R. v. Stinchcombe, defendants have a Charter right to access all of the evidence held by the Crown.

The Manitoba proposal will mean shorter wait times for trial dates. Right now, the time between the request for a preliminary inquiry hearing date and when the inquiry ends often adds anywhere between 8 to 18 months to the court process.

Taking out the preliminary inquiry step will shorten the process. It will reduce the time an accused has to spend in pretrial custody awaiting trial. And it will mean the discovery process is less distressing for victims and their families.

That's one of the reasons why the Manitoba Organization for Victims Assistance supports what we've proposed saying that, "legal proceedings for homicides result in constant revictimization for families of homicide victims," and that "by eliminating preliminary inquiries, one of those experiences of re-victimization and trauma would also be eliminated."

The Manitoba proposal will also free up valuable court time. As the Aboriginal Justice Inquiry pointed out, if preliminary inquiries were eliminated, provincial court judges would no longer be presiding over them freeing up their time to hear other matters.

Among the other benefits are that it will save police officers the time it takes for them to come to court to testify at preliminary inquiries, and it will save corrections authorities the costs relating to the time spent in pretrial custody.

Finally and most importantly, by reducing the time it takes to bring a case to trial, the Manitoba proposal will ensure fewer cases are thrown out because of unreasonable delays.

The Manitoba proposal is a balanced and responsible approach to preliminary inquiry reform. It not only keeps in place a form of discovery process that will allow accused persons to know the case they have to meet, but it also provides for timely justice.

The time has come to find solutions and to modernize the antiquated, inefficient and costly preliminary inquiry process. The status quo is simply no longer an option. 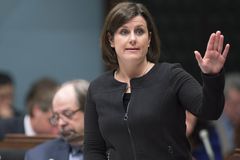 Prosecutors trying to prevent an accused murderer from walking free
June 10, 2017
Ontario prosecutor says preliminary inquiry tradeoff did not amount to coercion
April 15, 2017
Follow us on Twitter @globedebate Opens in a new window
Report an error
Due to technical reasons, we have temporarily removed commenting from our articles. We hope to have this fixed soon. Thank you for your patience. If you are looking to give feedback on our new site, please send it along to feedback@globeandmail.com. If you want to write a letter to the editor, please forward to letters@globeandmail.com.
Comments