Psychology professor Jordan Peterson is a man under siege. Angry students are accusing him of hate speech and transphobia. More than 250 faculty members at the University of Toronto, his employer, have signed a letter condemning his behaviour. The CUPE union local has denounced him and told its employees not to report to work if they feel "unsafe." Now even his bosses have lowered the boom. A joint letter signed by David Cameron, the dean of arts and sciences, and Sioban Nelson, the vice-provost for faculty and academic life, warns him that he is suspected of a serious breach of human rights.

What, then, is the nature of Prof. Peterson's misdeeds? He refuses to use gender-neutral pronouns for non-binary students. You can be excused for saying "Huh?" Unless you are up-to-date on the gender pronoun wars, you probably don't have the foggiest idea what that means. So listen up. One day soon, you too could be guilty.

Transgender rights are a big deal these days – so big that a federal law will soon enshrine them along with other human rights. No one can deny that transgender people should be treated with the same dignity and respect as anybody else. So far, so good. The battle at the U of T is whether they're entitled to their own pronouns as well. Prof. Jordan says no. Trans warriors – and the university administration – say yes.

Among other matters, equal treatment refers to a person's right to be referred to as the gender with which he or she identifies, regardless of biological makeup. If you self-identify as a man, you should be addressed as a man. Most of us – including Prof. Peterson – don't have a problem with that. But activists have gone far beyond that elementary notion. They argue that the very idea of two genders is a restrictive system that cruelly discriminates against many. They demand the right to construct their own reality as they see fit. Some want to be known (singularly) as "they." Others think "they" isn't the right fit either, and prefer to choose from an ever-expanding list of made-up pronouns such as "xu," "hir," "ze," and so on.

And that is where Prof. Jordan gets off the bus. He doesn't think that people should be allowed to change the grammatical features of normal words, or inflict made-up words on the rest of us to satisfy their need for gender self-expression. He even thinks (heretically) that a large majority of the human race actually is gender binary, and that gender is inextricably linked to biology, and that our language should reflect that. "I don't recognize a person's right to determine what pronoun I use to address them." he said in a video he posted to YouTube. "I don't know what the options are if you're not a man or a woman."

In the world of academe, these are fighting words. "People don't seem to understand what a big effect refusing to use someone's pronouns has on them, it can really mess them up," a protester named Arden Chow told the Toronto Star. Clearly, the higher-ups at the U of T are feeling pretty messed up, too. Their warning letter says: "Your statements that you will refuse to refer to transgendered persons using gender neutral pronouns if they ask you to do so are contrary to the rights of those persons to equal treatment without discrimination based on their 'gender identity' and 'gender expression.'" His comments have been blamed for inciting a rash of harassment, even death threats, the letter notes.

The pronoun warriors have won many victories. At leading U.S. universities, such as Columbia and the University of Michigan, students are allowed to select their own "designated personal pronoun," whose use is mandatory (one wag at the U of M immediately sabotaged the system by demanding to be referred to as "His Majesty"). In New York, you could face a fine for failing to use a person's chosen pronoun. In Canada, the Toronto District School Board, the Alberta ministry of education and other public institutions also require that people's personal-pronoun preferences be respected. Intentional failure to do so may be considered a form of discrimination, and is not condoned. It's a certainty that private-sector work places won't be far behind.

Funnily enough, when I called the Ontario Human Rights Commission to find out if Prof. Peterson was breaking the law, they had no idea. Their guidelines on transgender rights were written in 2014, before the explosion of the pronoun craze, and did not contemplate a world of "ze" and "hir." "I imagine whenever they decide to update the policy perhaps there might be a fuller discussion," said the media person, trying to be helpful.

Meanwhile, Prof. Peterson's fate is in limbo."We are at the state where refusing to say 'they' when compelled is regarded as an act of criminal incitement," he told me. "I feel like I've stepped into a parallel universe." 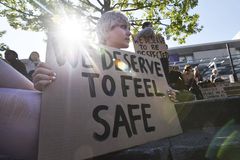 Police investigating online threats sent to transgender people at U of T
October 14, 2016
Opinion
Customized pronouns: A good idea that makes no sense
October 15, 2016
U of T professor’s stand against genderless pronouns draws fire
October 7, 2016
Follow us on Twitter @globedebate Opens in a new window
Report an error Editorial code of conduct
Due to technical reasons, we have temporarily removed commenting from our articles. We hope to have this fixed soon. Thank you for your patience. If you are looking to give feedback on our new site, please send it along to feedback@globeandmail.com. If you want to write a letter to the editor, please forward to letters@globeandmail.com.
Comments