It is the game's one constant.

Everything else in hockey has changed – the rules, the players, the protective equipment, the nets, sticks, skates, boards, glass, standings, ticket prices, even the ice itself – but not the puck.

It remains as defined by Rule 13.1 of the NHL official rulebook: "The puck shall be made of vulcanized rubber, or other approved material, one inch (1") thick and three inches (3") in diameter and shall weigh between five and one-half ounces (5 ½ oz.) and six ounces (6 oz.)."

That tiny rubber disc hit the news this past week when it brought an end to the NHL's current Iron Man streak, stopping the remarkable run of Tampa Bay Lightning forward Martin St. Louis at 499 consecutive games. St. Louis took a puck in the face during practice, the edges of the puck cutting him badly and the impact fracturing nasal and orbital bones.

There still would have been damage, obviously, but Harry McEachern can't help but wonder if it might have been lessened if only the NHL had elected to go with a puck he helped Dave Hay develop more than half a century ago.

McEachern, now 87 and retired in Hudson, Ohio, was working for Polysar Ltd. in Sarnia when Hay – whose father, Hockey Hall of Famer George, had played for the Detroit Red Wings – came up with a puck made of butyl rubber that was the same size and weight as the puck in the rulebook but had somewhat different characteristics.

The new puck required no freezing, as is still done to NHL pucks in order to keep them from bouncing. Butyl rubber, McEachern says, is an "energy-absorbing material" that doesn't bounce well. The puck appeared to slide more easily on the ice and, mysteriously, caused very few cuts when flying up into players' faces.

"If it came in touch with the skin," McEachern says, "it didn't break. I can't explain it."

Local leagues experimented with the new puck for a couple of seasons in the late 1950s and the Red Wings tried them out in practice and were suitably impressed. But the league never adopted it.

The butyl puck today stands in a long line of pretenders who could not bump the puck first developed by Art Ross, Eddie Shore and others in the 1930s and manufactured by Tyer Rubber of Andover, Mass. In March of 1951, the Art Ross Puck – U.S.A. patent 2226156 – was named the official NHL disc. Today, the official puck is manufactured by Soucy Baron of St. Jerome, Que., shipped to InGLasCo in Sherbrooke, stamped with appropriate logos and delivered around the league.

In the decades since McEachern and Hay thought they had reinvented the hockey puck, hockey historian J.W. (Bill) Fitsell says there have been numerous attempts to come up with something new, including a U.S. initiative to replace the black puck with a red one – more patriotic, the argument went, by having a red puck with blue lines and white ice.

The most famous attempt, surely, was Fox TV's so-called smart puck, during the network's lame attempt to give NHL hockey a national platform. FoxTrax was hilarious to Canadians, who couldn't get enough of laughing at the blue streak on their screen that often showed the puck flying about the first two rows of seating.

There have also been attempts to apply reflective materials – the Glowpuck and Firepuck – and even a plan to outfit pucks with internal sensors that could tell, for example, precisely whether a smothered puck had crossed the goal line. In that case, price was obviously prohibitive: Unlike in children's leagues, fans don't throw pucks back in the NHL.

McEachern and Hay still believe their long-ago improvement was the best of them all – a puck that slid better, didn't bounce and, most significantly, didn't appear to do the same physical damage that today's errant pucks can cause.

As for practicality, McEachern fondly remembers that when they tried it out with the Red Wings, Gordie Howe had the only question that truly mattered to the players.

Opinion
From elation to gloom, the NHL spirals into the abyss
December 12, 2011 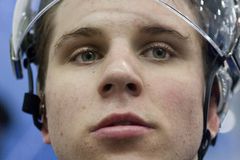