It isn't over until it is over and it is finally over. The idea of significant Senate reform is dead in our time courtesy of the Supreme Court reference decision. Gone. Kaput. Vanished. Forget about it.

Some diehards won't give up. They suggest de facto abolition by prime ministers simply refusing to make appointments until the Red Chamber dies with the passing of the last senator, nothing left but the grin of the Cheshire Cat. Constitutional idiocy. When the number of senators drops below a quorum, Parliament (of which the Senate is a necessary part) stops. The wheels fall off. No more budgets, bills, no any of the fine things that our political masters contrive to better our lives.

Some propose variants whereby prime ministers appoint only an equal number from each province to arrange for the famous Triple-E Senate. Any significant evidence of this would see lawsuits by deprived provinces demanding the prime minster do his duty. Good political theatre perhaps, bad policy.

Even Liberal Leader Justin Trudeau's no doubt well meant, but foolish scheme to depoliticize the Senate might founder upon any well defined scheme of appointment, a necessary part of his plan. This could again require provincial assent. More importantly, it would lead to a powerful Senate with no democratic connection to the elected caucuses, a horror show waiting for the curtain to rise.

Other diehards will seek significant reform schemes that the provinces and feds would support in a major consensus. Good luck with that. A child born next year might see this by the end of his or her life, but most of us will concern ourselves with more immediate matters such as the effects of climate change 50 years hence.

And yet the Senate lives on with all of its enormous powers. So now what? There are two routes only, namely "same old" in terms of appointees, or "better senators."

The mad Emperor Caligula appointed his horse to the Roman Senate, presumably to show his contempt for that body or his regard for the equine. Canadian prime ministers have, from time to time appointed, only the rear part of the horse to our own Upper Chamber.

But surely Prime Minister Stephen Harper must stand at the pinnacle of responsibility for the addition of disgraceful names, of which we will learn more as the details of police investigations unfold. Now is an opportunity for him to be a great prime minister, if he can, to take a second look and set a new pattern. What might it look like?

First, a great prime minister might set as a personal target the naming of new senators in such a way as to gradually make that place a better mirror of Canada generally, in terms of linguistic, gender and ethnic balance. Nothing new about this trend. The Senate is already a better reflection in these terms than the House. But we have a way to go.

One dimension where the Senate should not reflect the country is in age. It is supposed to be a place of sober second thought. And wisdom, especially political wisdom, comes with age. I would put a higher age requirement – not in law but in aspiration – of 55. Retirement is at 75 and a 20-year term is long enough. One might go a step further and make senatorial pensions fully earned after 15 years, encouraging early departure by those feeling they have given what they can.

Second, a great prime minister might look at how Supreme Court judges are nominated. Judges, too, are appointed by the prime minister (in fact, if not law) but problems are few because most names on the potential lists have already been vetted by panels of the legal community in each province. (Where this is not the case, one can occasionally encounter a Marc Nadon-like embarrassment.)

Such a system should be set up for senators, with the PM undertaking that with few exceptions, appointees are to be chosen from a list advanced by local panels. These could include representation from the governing and opposition parties in the legislatures, municipalities, universities and so on. As with court nominations, these lists should be private and for the eyes of the PM only.

Finally, a revolutionary idea, give the Leader of the Opposition in the House of Commons a few appointments to make on his/her own call – every fourth one, say. The opposition in the Senate must be kept healthy as well, and opposition parties need strong members to be ready for their eventual day in office.

If Mr. Harper doesn't like this kind of appointment reform, it sounds as though Mr. Trudeau might. This is a matter not to be overlooked at the next election. 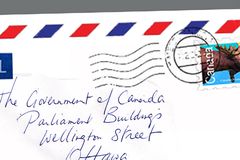