Matti Friedman is an Israeli Canadian journalist and author of The Aleppo Codex and Pumpkinflowers.

Different religions have their own holy sites in Jerusalem, the city where I've spent my entire adult life. The place I believe to be among the most important, however, is a grubby swath of garages, welding shops and furniture stores known as the Talpiot industrial zone. The zone is sacred to no one and unknown to tourists or foreign correspondents. It's a short walk from my street, so I spend a lot of time there – the industrial zone is where you can find the best hardware store, the cheapest supermarkets, my barber and stores selling balloons for birthday parties, model airplanes or anything else you could ever need.

When President Donald Trump announced on Dec. 6 that the United States would recognize Jerusalem as Israel's capital and move its embassy here, Arab leaders called for "days of rage" and a chorus of Western observers predicted an explosion. The predictions were predictable; Jerusalem is always said to be on the brink of catastrophe, and headlines are always reporting "tensions."

The city is certainly volatile, considering: the proximity of sites holy to Muslims, Christians and Jews, all under Israeli control; the fact that more than one-third of the city's residents are Palestinians, mostly Muslims, who aren't Israeli citizens and tend to see Israeli rule as illegitimate; and the city's existence in a region engulfed in a religious war. But what is truly interesting about Jerusalem is not the proximity of the brink, but the way the city's residents often refuse to play their part in the script by stepping off.

After Mr. Trump's announcement, amid warnings of "explosive" repercussions, I got e-mails from friends abroad, wondering whether I was worried, or whether I was safe. That Friday, a crowd of reporters gathered at the Old City's Damascus Gate to document the violence that was supposed to erupt. But little happened; the protesters were outnumbered by journalists, and everyone went home. There weren't spontaneous mass celebrations on the Jewish side or mass disturbances on the Arab side. The past week has been fairly normal.

I don't think many veteran residents are surprised. Jerusalemites – Jews and Arabs – don't necessarily have much in common, but we've all hewed out private lives in an immensely complicated political environment, and share an acute sense of the fragility of those lives. People here aren't bears in a political circus who dance on call. Every act of bloodshed here is heavily covered, which creates the impression that Jerusalem is a violent place, but that's misleading. If you count every single violent fatality reported here this year in this city of 860,000 – not just political violence but apolitical homicides, too – the number is 27. That's 27 too many, obviously. But it's worth pointing out that 27 is less than a quarter of the homicide number last year in Jacksonville, Fla., a U.S. city the same size.

I've been in Jerusalem for nearly two decades and am still trying to figure it out. What I have figured out, though, is that understanding means seeing it not as a symbol but as an actual city, and taking its people seriously as real people. I realize that isn't what most foreign observers are looking for in Jerusalem – mundane features such as hospitals or supermarkets aren't relevant to cosmic dramas of salvation, peace, the apocalypse, or the "Trumpocalypse," as some local wits were calling last week's dire forecasts. But anyone inclined to truly grasp the place will have to look at the prosaic power of daily life. Our temple to daily life is the Talpiot industrial zone.

This week, I went to one of the big supermarkets in the zone, on Ha'Oman Street, where much of the city does its grocery shopping. This is an Israeli area, but of the 50-odd workers I counted among the aisles of produce and cereal, at least two-thirds were Palestinian. One cashier, a Jewish woman in a modest hair covering (navy blue, tied at the nape of the neck), was serving three Muslim women in modest hair coverings (grey, pink and black, respectively, clasped under the chin). At a SuperPharm nearby, the scene was similar – an Arab female pharmacist serving a Jewish woman with a prescription, a Jewish cashier and two Arab guys stocking the shelves.

From there, I went to a franchise of Fox, an Israeli clothing chain. Of seven customers in the store with me, three were speaking Arabic. When I reached the counter, the cashier turned out to be Palestinian; the only giveaway was a slight Arabic accent in his Hebrew. It was once easy to tell people apart by their clothes, but the rise of global brands has meant that people, especially young people, tend to dress the same – the same skinny jeans, the same soccer haircuts. The old visual lines have been blurred, like the old geographic lines: Ten years ago, it would have been remarkable to see Palestinian customers or salespeople in a Jewish part of town, but today what's remarkable is how unremarkable it's become.

My friend Marik Shtern, a geographer at the Jerusalem Institute for Policy Research, is the author of a report, published this month on the trend, written with a Palestinian colleague, Ahmed Asmar. The city's economic engine in Jewish Jerusalem is drawing more and more workers from the city's Arab areas, and mixing in the workplace has dramatically increased. The movement was exacerbated by Israel's construction of a separation barrier to combat a wave of Palestinian suicide bombings between 2000 and 2004, which cut off Arab Jerusalemites from their traditional hinterland in the West Bank. At the same time, the chances of a peace deal that would divide the city have evaporated in the general breakdown of the Middle East; no one's about to risk a power vacuum in a city that's a three-hour drive from Syria. So, over the past decade, the city's Jews and Arabs have realized they're stuck with each other.

Nearly half of the city's Arab workers are now employed in Jewish areas, according to Mr. Shtern, and the number is rising. So is the number of Palestinian students enrolled at Israeli universities, the gateway to better jobs in the Israeli market. Three years ago, an employment centre funded by the Israeli government quietly opened in the Arab neighbourhood of Shuafat, with job placement services and Hebrew classes, and there was so much demand that a second opened this year.

What all of this means is that working hands in Jewish Jerusalem are increasingly Palestinian, as one sees in every corner of the Talpiot industrial zone. And it means that salaries in Palestinian homes increasingly come from Israeli employers. So Palestinians and Israelis might not like each other, but their fates are becoming more tightly entwined, and everyone has more to lose if things fall apart. That's a big part of the city's secret glue. The glue is tested frequently – by a war in Gaza, for example, by Muslim sensitivities about the al-Aqsa Mosque, by Jewish extremism, by Muslim extremism or by Mr. Trump's embassy announcement and the resulting calls for violence across the Arab world. The glue has held.

Noting the glue's existence isn't saying the city is equal or happy. "When people come to work, they don't leave their political identity at the door," Mr. Shtern told me. For their study on mixed workplaces, he and Mr. Asmar interviewed Israelis and Palestinians. They found that many Israelis saw the presence of Arab colleagues as proof of progress and noted a "moderating" of their political views as they learned about hardships in Arab neighbourhoods, such as invasive police checks and discrimination in planning and resources. It was different for their Arab co-workers, who were being welcomed to better-paying jobs but also made painfully aware of the glass ceiling: These were Israeli businesses, and they were far more likely to be stocking shelves than managing the store. The human dynamic here is both positive and negative and, as with all human dynamics, tricky to foresee. "If the status quo continues," Mr. Shtern said, "we're likely to keep seeing what we're seeing now – occasional violence alongside increased dependence, and a certain level of integration in the social landscape of the city."

The mood here, a day's drive from the urban apocalypses in Aleppo and Baghdad, is a strange one these days. I'm not sure Jerusalem has ever been so politically hopeless, or so quiet. That might seem mysterious given what most people know and say about the city, but it's much less mysterious if you pay less attention to political headlines and more to people in the industrial zone. If you think an embassy is more important than a supermarket, you'll miss the human drama in the produce aisle. 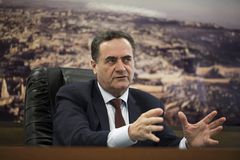