Anne-Marie Slaughter is president and CEO of New America and the author of The Idea That Is America: Keeping Faith with Our Values in a Dangerous World

A recent front-page photo in The New York Times of a boatload of Syrian refugees drifting on the Mediterranean Sea beneath an enormous setting sun could not have been more apt. The sun seems to be setting on Syria itself.

In the words of David Miliband, a former British foreign secretary and current president of the International Rescue Committee, the disaster in Syria has reached "almost biblical proportions." The Syrian Observatory for Human Rights estimates that, over the last four years, nearly 250,000 people have been killed, including more than 100,000 civilians, many of whom were killed in horrific ways by their own government. The United Nations estimates that over half of the country's 22 million citizens have left their homes, something the world has not seen since the Second World War. Today's rising tide of disease, hunger, squalor, and illiteracy – more than half of the refugee children are not in school – will affect an entire generation for life.

Fortunately, the United States' foreign-policy elite finally seems ready to do something to protect Syria's people. Generals, diplomats, national-security officials, and development professionals are approaching a consensus in favor of a no-fly "safe zone" along one of Syria's borders.

In fact, Turkey's government proposed such a sanctuary (calling it a "buffer zone") four years ago. But the Turkish authorities never proved willing to turn words into action – not that they received any encouragement. Indeed, until recently, the U.S. and most NATO countries were resolutely opposed to the idea.

The change of heart was driven by four factors. First, there is the migrant crisis in southern Europe, a threat more diffuse but no less dangerous and challenging than Russia's invasion of Ukraine. According to the International Organization for Migration, as of July, some 150,000 migrants had reached Europe by sea this year, double the number during the same period in 2014.

But the headline-making stories of sinking boats and drowning children are just the beginning. An estimated 30,000 migrants are now crossing the Serbian border into Hungary every month, spurring the country's right-wing government to launch the construction of a 110-mile fence to keep them out. And, in July alone, almost 50,000 migrants entered the European Union through Greece.

While Syria is not the only country fueling this refugee crisis, it is the largest contributor. Indeed, according to the UN High Commissioner for Refugees, 34 per cent of the 137,000 people who arrived in the EU from Jan. 1 to June 29 were from Syria, with the next-largest contributor, Afghanistan, accounting for 12 per cent. Other notable contributors include Eritrea (12 per cent), Somalia (5 per cent), and Iraq (3 per cent). The number of Syrians is thus essentially triple that of the next highest group, a proportion that holds true among European asylum-seekers as well. With more than 10 million Syrians displaced, this trend will only continue unless something is done to ensure that they can live safely within their home country.

The second factor that is spurring a shift in America's attitude is the recognition that a new Syrian government is vital to defeat – or even contain – the Islamic State. The fact is that the Islamic State is not the only violent and destructive force in the country; Syrian President Bashar al-Assad, whom the militant group is committed to overthrow, is also a mass murderer and war criminal.

According to the Violations Documentation Center, the leading cause of death among Syrian civilians this year has been the indiscriminate use of aerial weapons – barrel bombs and chlorine gas dropped from helicopters by the Syrian army. For Syria's many rebel groups, Mr. Assad represents the greater threat, and thus will have to be removed from power before attention can be focused on defeating the IS.

Third, the nuclear deal with Iran, despite facing continued scrutiny in Iran and the U.S., has raised hopes that the country could play an important role in pushing for a political solution in Syria. Not only is Iran's policy of supplying weapons and fighters to keep Mr. Assad in power unpopular at home, the country's leaders also recognize that fighting the IS in Iraq is a half-measure at best, as long as the group controls vast swaths of Syrian territory.

Finally, longer-term thinkers understand that a generation growing up alienated and angry in refugee camps, as several generations of Palestinians have done, is a generation of potential radicals. With nothing to lose, they seek revenge for their parents' expulsion from a homeland that, over time, becomes increasingly idealized. From this perspective, the current humanitarian crisis is, in the longer term, a strategic crisis.

Taken together, these factors are compelling the U.S. and Europe to change course. And the Western perspective is not the only one that is evolving. Syria's neighbors finally seem to understand that the country could fragment into a Kurdish state that destabilizes Turkey and an Islamic State territory that destabilizes Iraq, Jordan, and Saudi Arabia.

By establishing a no-fly zone – which could be defended using sea-based missile systems – the U.S. and its partners would demonstrate to Mr. Assad that their patience has finally run out, and that they are prepared to defend Syrians within Syria. This, together with the knowledge that his army is weakening and the pool of new recruits is drying up, would force Mr. Assad to reconsider his long-term prospects and, most likely, force him to the negotiating table. After all, the only time he has been prepared to strike any kind of deal over the last four years was when he believed that the U.S. was prepared to intervene militarily in response to his use of chemical weapons.

Syria will take decades to rebuild, with future generations scarred by the political and psychological consequences of the current turmoil – much like Bosnia, but on a much larger scale. The arms and money flowing to self-proclaimed holy fighters over the last four years have fanned revolutionary flames that may yet lead to a redrawing of the map of the Middle East. But we cannot simply write off the millions of people caught in the middle. For both moral and strategic reasons, the time for a no-fly zone is now.

Opinion
Why defence matters in this election
August 19, 2015 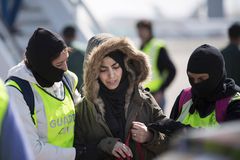