On March 16, six days after protesters disrupted a St. Louis rally and led to Donald Trump cancelling his event in Chicago, Trump supporter Scottie Nell Hughes went on CNN to give her assessment:

"Riots aren't necessarily a bad thing," she told Wolf Blitzer, noting that they represented "the voice of the people." Mr. Trump later echoed her comments – deflecting, as usual, to the purported will of his fans – by noting his supporters would riot if he did not become the nominee: "I wouldn't lead it, but I think bad things would happen."

Mr. Trump's seeming encouragement of riots, along with inflammatory remarks like offering to pay the legal fees of fans who attack demonstrators, had led some to condemn anti-Trump protesters as playing into the GOP front-runner's hands. "Black Lives Matter protesters may help elect Donald Trump president," argued James Robbins in USA Today. Other pundits stated that demonstrations were a waste of time and energy, a botched election strategy that only gives Mr. Trump fodder to demonize his opponents.

What those who condemn anti-Trump protests miss is that the protests are about more than Donald Trump. They are not about electoral strategy, but everyday survival. They reflect concerns and grievances from those who are already suffering under local officials whose practices mirror Mr. Trump's proposed policies: aggressive police who persecute black citizens, xenophobes who cry for Latino workers to leave the U.S., bigots who see every Muslim as a potential terrorist.

It is not a coincidence that the first major Trump disruptions were in St. Louis and Chicago, cities that have been in near constant protest for two years against sanctioned acts of local brutality.

At the St. Louis rally, which I attended, the faces were familiar. They were the same protesters who took to the streets in Ferguson: a diverse array of activists – black, Muslim, Latino, white – who saw in Mr. Trump a familiar threat elevated to a national level. They protested not only against Mr. Trump, but for each other – to proclaim that his hateful rhetoric would not be tolerated and that citizens would protect each other were he to come to power. Theirs was not an act of aggression, but a declaration of defence.

Chicago's activists were similarly motivated by local injustices. As they protested Mr. Trump, they also promoted the "Bye Anita" movement, which convinced voters to remove State Attorney Anita Alvarez, who had a track record of tolerating police brutality, from office. No Trump protest takes place in a vacuum. While Mr. Trump has capitalized on racial strife and panic over foreign-born Americans, those he demonized have shown up at rallies to stand up for themselves – and for their neighbours, to let them know they are not alone.

At the St. Louis Trump rally, I witnessed fist fights and beat-downs, with the gathering yielding more arrests than anywhere in the country. A bloodied St. Louis protester made the cover of the New York Daily News. It felt like when I covered Ferguson, only Ferguson was a battle between protesters and police, with aggressive racists largely staying home. Here, they came out in the open to support Trump.

The scene was primed for battle. And it is in the media depiction of this battle – not the moral necessity of the battle itself – that there is cause for protesters to be wary.

Mr. Trump's racist rhetoric has been big business for the financially decimated news media, boosting revenue to new heights. "The money's rolling in and this is fun," said CBS News chief Les Moonves. "Bring it on, Donald. Keep going."

Anyone who witnessed the Ferguson protests in person saw the discrepancy between reality and TV: the daily shock and sorrow, as mourning locals dodged rapacious reporters, and the rare nights of protester violence, signified by a burnt-down convenience store that stood as a symbol for the riots, - that, by the way, weren't actually riots, but large-scale protests dramatically suppressed by militarized police. The complexity of the Ferguson narrative was cut into an endlessly looping shot of a street on fire.

For months, Mr. Trump has had cable news playing by his rules. That does not mean anyone else needs to follow them.

Opinion
Rob Ford and Donald Trump: Plato would get it
March 30, 2016 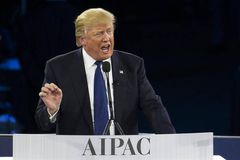