"Change the Channel on Attack Ads," pleads the Green Party of Canada in its own ads. "It doesn't have to be like this." The Greens are right in theory, wrong in practice.

Actually, it does have to be this way, because attack ads work. And as long as they work, parties will use them - the only difference today being that the Conservatives deploy more of them than any party in Canadian history.

Attack ads are also deeply ingrained in the way the Harper Government - the new name for the Government of Canada, according to instructions from the office of the imperial Prime Minister - does politics. Imagining that the Harper party wouldn't descend to low blows by whatever means is, well, unimaginable.

Liberals, lest they get too precious about attack ads, have also used them. The Trudeau Liberals went after Progressive Conservative leaders Robert Stanfield and Joe Clark. The Martin Liberals ripped Stephen Harper in the 2004 election for his "hidden agenda." "Going negative" has been part of the Liberals' arsenal since the age of television began dominating political communications.

The Harper party has taken the Liberal practices two steps further. They've launched extremely personal attacks against Liberal leaders between elections, courtesy of the fundraising machine that the Harper party has built. And they've used more of these sorts of negative ads than Canadians have seen before.

Well, if they didn't work, parties wouldn't use them. Every ad for soap, travel or politics is only crafted after extensive testing of messages with focus groups. Every line, every word, in an advertising script is retested with focus groups to see what moves people. And not just people in general, but specific kinds of people.

Attack ads aren't aimed at everyone. That supporters of the leader and party being attacked gag at these ads is of no consequence to the attacker. That well-informed people hate them is irrelevant. Attack ads are intended largely for two slices of the electorate.

In the Harper party's case, the first group is the core of its own supporters. They don't need attack ads to solidify their Conservative preferences. What attack ads do is stoke their anger and fear, heightening the chance they'll vote and - of critical importance - reach for their chequebooks each time one of those "sky is falling" letters arrives from the Conservatives' chief fundraiser, Senator Irving Gerstein.

An even more important group is what we might pejoratively call the ill-informed and uninterested. These are voters who don't follow politics, don't track issues, are aware only in the vaguest way of what governments do (except levy taxes) and make up their minds (if they vote at all) largely on the basis of image and impressions of party leaders. These are often "swing" voters in that they don't have anchors in partisanship or issues. They're heavily influenced by what they see on TV, since they get almost all of their political information from that medium.

When, for example, the Conservatives were holding focus groups before their first attack ads against Liberal Leader Michael Ignatieff, they found that voters were only vaguely aware he'd spent a lot of time outside Canada. When respondents discovered how long he'd lived abroad, they became decidedly more negative. Hence, the attack ads' focus on the length of time Mr. Ignatieff was out of Canada. 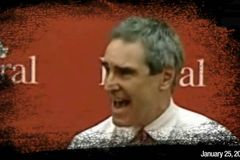 Opinion
What if Stephen Harper's previous views were used against him?
March 5, 2011
Opinion
Aftermath of an 'in and out' election scheme
March 3, 2011