The moment a white cop pulled the trigger and killed an unarmed black teenager in Ferguson, Mo., last August, one thing was certain. The facts were not going to matter very much. Most people's take on what happened – and everything that's happened since – has essentially been predetermined by their view of race relations in America. And so we have two completely different versions of the story.

In one version (call it The New York Times/MSNBC/liberal version), the killing of Michael Brown was just another in a long string of racial assassinations that include Trayvon Martin and countless other innocents. A trigger-happy cop sees a suspicious-looking black kid and starts blasting away. The kid is a threat by virtue of his skin colour, and dies in a hail of bullets. The community turns out to protest this latest example of police brutality. Some of the protesters turn violent, but their anger is at least partly justifiable. In Ferguson and across America, heavily militarized white police forces inflict a daily reign of terror on black communities. In the case of Michael Brown, most people in the community believe the cop shot the kid as he tried to surrender with his hands up. But the cop will never face justice, because a grand jury has refused to indict him – yet another example of the deadly racial injustice that poisons America.

In the other version (call it the Fox News/New York Post/conservative version), Michael Brown is no gentle giant. He is a menacing, 290-pound thug who strong-armed a box of cigarillos from a convenience store just before his encounter with the cop. When the cop tells him to walk on the sidewalk instead of the middle of the street, he charges the police car, swears at the cop and tries to grab his gun. The officer, Darren Wilson, fires in self-defence. Local protests turn violent, and some businesses are smashed, looted and burned. The grand jury decides not to indict the cop because there's not enough evidence that he did anything wrong. Forensic evidence does not support the claim that the victim was shot as he surrendered. The racial tensions between police and African-Americans are largely due to the violent behaviour of many young black men, who commit a disproportionate number of crimes.

Not everyone who defends the police, incidentally, is white. Former NBA star Charles Barkley kicked up a storm of controversy when he condemned the looters and said, "If it wasn't for the cops, we'd be living in the wild wild west in our neighbourhoods."

It's a rare person who can get beyond the two simplistic versions of this story and give us a deeper, more nuanced glimpse of the truth. One voice worth hearing is that of Safiya Jafari Simmons, who explained on the CNN website why she feels torn about the grand jury verdict. She is a black woman who is raising a black son, and her black husband is a cop. "The grand jury's decision seems to double down on a pattern in this country of killing black boys without care or consequences," she writes. But as the wife of an officer, "I can't support either camp fully – neither the outraged black community nor the justice system sworn to protect us. … All cops aren't bad. All cops aren't racist. … They are people doing a job that few are brave enough to take on."

"America will never get past race without a profound change in how police forces relate to black men," writes John McWhorter, a black political commentator whose take on Ferguson is both anguished and complex. Michael Brown, he writes in Time, makes a poor civil rights icon. The cop didn't single him out because of his race, but because he'd just lifted goods from a store and assaulted the owner. "Beyond the converted, the less committed observer will see the facts piling up and conclude that one can be fully aware of racism's persistence and yet still feel that the part racism played in Brown's death is too abstract to qualify as a Selma-style – or even Trayvon-style – teaching moment." He worries that "we have chosen the wrong tragedy to wake this country up."

In truth, there is no black and white in Ferguson, only complicated shades of grey. But nuance doesn't play well on cable TV, or even in The New York Times. Everyone will use Ferguson to confirm their version of the existing narrative. That's the way it goes with racial politics in America. The narratives are too entrenched, and the wounds are just too deep. 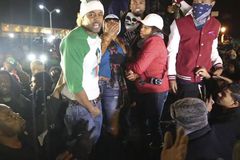 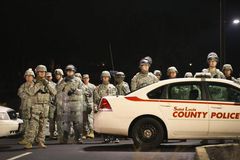