Erna Paris's most recent book is From Tolerance to Tyranny: A Cautionary Tale from Fifteenth-Century Spain.

"The United Nations should help," said the Syrian refugee who had walked for hundreds of kilometres, only to be obstructed by police in Hungary.

What do we say to this man about our apparent impotence in the face of Syrian President Bashar al-Assad? What do we say about impunity, terror, and the imminent devastation of climate change that will create a new tsunami of people like him? Refugees are a UN responsibility, so the man's plea was understandable, but curiously few continue to look in that direction. The world body still does a good job with certain agencies, such as UNICEF. It has made progress in ending extreme poverty. But in its core mission of maintaining peace and security, the Security Council vetoes on the part of Russia, China and the United States have disillusioned millions of supporters.

The inability of the UN to end the Syrian conflict is a direct sign of failure, Secretary-General Ban Ki-moon acknowledged this week. This is not just a pity: There is danger attached to a collective loss of faith in the UN, for if confidence in the world body founders, whatever constraints on power politics exist will loosen further still.

As the UN marks its 70th anniversary next month, its sole saving recourse is reform, a project that has seemed out of reach. But in The Hague in June, former U.S. secretary of state Madeleine Albright and her co-chair, Ibrahim Gambari, former foreign minister of Nigeria, presented a report titled Confronting the Crisis of Global Governance, which offers a modicum of hope.

The report's broad-ranging suggestions included enhancing the conflict prevention and peace-building roles of the International Court of Justice to generate better communication with the Security Council; improving climate-change governance through new networks and better accountability; establishing a "G20 Plus" to create a core secretariat with closer ties to the world's major economies in order to avert financial shocks; investing in a new generation of UN and regional peace operations and transforming the Peace-building Commission; and reforming the Security Council itself, by broadening its contacts with regional organizations, civil society and the business community, allowing these to have a voice in building peace.

Finally, and perhaps most important, Ms. Albright and Mr. Gambari endorsed the growing international campaign to create a United Nations Parliamentary Assembly (they call it a "network"), an idea first put forward decades ago by the World Federalist Movement that has been gaining traction. What's lacking at the UN is democracy and accountability; that is where reform must begin.

It's a big idea, but simple in its premise. International collaboration is necessary to cope with the major challenges that confront us, but there's a lack of co-operation on important issues. To address this, national populations must be directly included in the activities of the UN. Just as the citizens of democracies are represented by local, regional, and national delegates, so should they be similarly represented internationally by a consultative parallel body at the United Nations. As a transitional step until direct elections become practical, this entity would be composed of delegates from national parliaments, including members of minority parties, who would operate independently (unlike current ambassadors to the UN). They would be free to raise sensitive issues and table proposals for consideration by the Security Council, the General Assembly and other UN bodies.

The UN Parliamentary Assembly could be created by a vote in the General Assembly under Article 22, which allows the assembly "to establish subsidiary organs such as it deems necessary" without changing the UN Charter. The concept is not unique: There are more than two dozen international parliamentary institutions, including the Council of Europe and the European Parliament.

Andreas Bummel, the Berlin-based secretary-general of the Campaign for a UN Parliamentary Assembly, said more than 1,400 former and sitting members of parliament from more 100 countries have endorsed the international appeal to create the new body. Former UN secretary-general Boutros-Boutros Ghali is a supporter.

In Canada, 65 MPs and senators from all parties (more than half of them New Democrats) have signed their names to the appeal. Other international signatories include hundreds of distinguished individuals from politics, science, civil society and cultural, life along with Nobel Prize winners such as Canada's John Polanyi.

Although critics will argue that the UN system cannot be fundamentally changed because of the antiquated veto system, Mr. Bummel's argument is pragmatic. "The key to understanding is to conceive of the UNPA as the beginning of a process, and not as a final goal," he told me.

Long ago, the ancient Greeks embraced big ideas that changed the world, including the bold notion of democracy itself. We need the same openness to new thinking – for the sake of the global order.

Opinion
Canada is missing in action at the United Nations
August 12, 2015 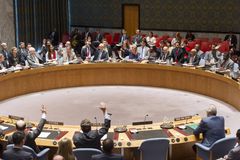