David Shribman is executive editor of the Pittsburgh Post-Gazette, and a Pulitzer Prize-winner for his coverage of U.S. politics.

About 179 years ago, John George Lambton, known to Canadians as Lord Durham, issued his famous report stating that Lower Canada consisted of "two nations warring within the bosom of a single state." He might have been describing Canada's neighbour to the south in 2017.

For the United States in the first breath of the Trump era is no peaceable kingdom. The President is bickering with the press, the Democratic opposition is plotting how to defeat the President's nominee for the Supreme Court, the Republicans are trying to patch over their fissures to work with a President they quietly regard as a threat, conservatives are worried their movement has stalled, liberals are scrambling to determine how to transform a series of protest marches into a formidable political force and everyone is trying to figure out what the Trump immigration policy is or means.

None of them has a clue how to proceed in this chaotic new era, presided over by a chief executive who has no experience with, nor respect for, the folkways of Washington and who is astonishing his supporters and stunning his opponents by actually following through on his campaign promises – proposals sober political analysts thought might be abandoned shortly after election day, surely after inauguration day.

The country, exhausted by a demeaning and debilitating presidential campaign, now is one part exhilarated and one part apoplectic about Donald J. Trump. The spectacle of the first few weeks raises fresh, unanticipated and, in a few cases, unprecedented questions in U.S. civic life.

The broadest question is whether the disruption Mr. Trump has pumped throughout the U.S. body politic is an analogue of the social, cultural and financial disruption in other parts of society, which have left the music, newspaper, retail, film, taxicab, real estate, book and soon – with driverless motor vehicles being tested in the streets of Pittsburgh – trucking businesses reeling.

Every element of North American life has been disrupted in the past decade and so it is possible Mr. Trump's ascendancy is simply part of the natural course of life in the 21st century, when all the norms have been abandoned and the abnormal and the improvisational has become customary.

There have been periods of profound disruption in the past, but in none of those cases did the presidency itself change dramatically. Indeed, it reacted to social change and did so relatively quietly and very slowly. Warren Harding gave way to Calvin Coolidge and then to Herbert Hoover in the 1920s, and the major thing that changed was in women's fashions (the disappearance of women's waists with the emergence of straight dresses and the movement up, then down and then up again, in skirt lengths).

At the same time, it is not clear whether the two political parties, the buoys that have defined U.S. political life since the end of the Civil War, are undergoing vast, permanent changes.

Only 18 months ago, Republicans had a discrete, discernible identity despite their internal disputes; generally, they opposed big government and big deficits, and they favoured low taxes and low tariffs. Now, they are led by a President who cares little for their traditional creed and talks boldly about a flood of spending for new roads, bridges and airports.

The Democrats are in no better shape, with no easily identifiable leader nor any plausible presidential candidates known beyond their own neighbourhoods.

The question now is whether Democratic lawmakers who are from states that Mr. Trump carried in November and who face re-election next year will lend congressional votes to Mr. Trump's initiatives (and his new Supreme Court nominee) as part of an insurance policy at the polls. They might – and as a result could face the fury of the marchers. And the marchers, fashioning themselves as the Tea Party of the left, may be the most unpredictable element of U.S. politics today, except of course the President they decry.

Opinion
So much for America’s historic role
February 6, 2017
Globe editorial: How to trump Trump
February 3, 2017 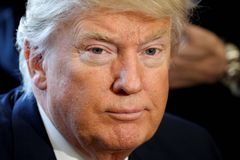 Opinion
Lessons from history will teach Canada how to thrive in Trump era
February 3, 2017
Follow David Shribman on Twitter @shribmanpg
Report an error Editorial code of conduct
Due to technical reasons, we have temporarily removed commenting from our articles. We hope to have this fixed soon. Thank you for your patience. If you are looking to give feedback on our new site, please send it along to feedback@globeandmail.com. If you want to write a letter to the editor, please forward to letters@globeandmail.com.
Comments